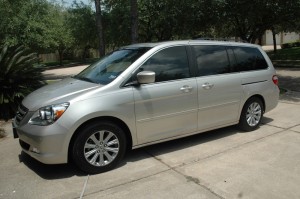 which actually looks the same as the mom mobile we had for awhile before we got the CRV: 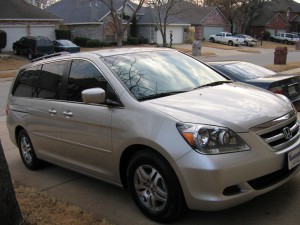 (we seem a little bit like car buying addicts.  I assure you, we are not. 🙂

The old was a 2006 Odyssey (the basic model), the new is a 2007 Odyssey Touring model, which basically means is tripped out for a minivan! It is so nice-WAY nicer than what I thought we would get. The way the whole thing went down is pretty crazy and we ended up getting an amazing deal on it!

( I just finished typing what’s below, and it’s a really long story. Sorry for being so long winded! I tend to ramble when I’m excited. Feel free to skip this entry and just be proud of my wonderful husband for scoring us an incredible deal.)

I went to the dealership on Wednesday just to get an appraisal on the CRV. I was trying to decide whether to trade it in, sell to carmax, and even just how close we were to at least being even on what we owed vs. trade in. Of course, car dealerships don’t want to do appraisals unless they think you are going to buy. After being there for several hours, I let the salesman show me the van, just for kicks. They wanted me to drive it home and show Derek, and I said no-it’s too big of a hassle to transfer carseats and junk. They said, well, we’ll bring it to your house. So I said yes. We went out to dinner that night and then returned it to the dealer. That’s when Derek got to go in and lay down the law. We aren’t buying this car. I don’t care what kind of deal you can give us. He played a little hardball (while in the back of our minds, we were for real going to discuss if this van could be a possibility.) Mr. Salesman says, well what if I can get you more for your trade in? Ironically, we received in the mail on Wednesday and advertisement for a big sale this weekend with top dollar trade-in value. Derek says how much? Mr. Salesman says 3,000 more. Hmmm…this just got interesting. Suddenly, we have a pretty good down payment with the trade in plus some money we have set aside for a car. D says, well, you have 10 minutes to make that happen or we’re out, oh, and we want the no-haggle internet price. Mr. Salesman talks to his manager and says, okay, it’s deal. Suddenly Derek is filling out paperwork. And I panic just a bit. It’s 7:45 p.m. The kids are going crazy, and I just feel like the whole thing is rushed. Derek and I talk quickly and decide that we need the night to think about it, that we are interested, but we cannot do it right now. The car people get all flustered. We say we’ll come back tomorrow, and they say, well, we can’t promise anything tomorrow. So we say, fine, we’re out. They say, take the van home. You can come back tomorrow and we’ll give you the same deal. We go home and spend many hours crunching numbers, researching, and discussing. Should we get another car just to get us through the next few years? Or should we go for the car that I will drive for the next 10-12 years at least? In the end, the deal was just too good.  It was the trade in thing that really did it. We didn’t get much less than if we sold it privately!

I am so thankful for a husband who not only provides for us, but who can go in and be (and I quote from Mr. Salesman) “the hardest sell I’ve ever had.” He was actually intimidated by Derek, which just cracks me up. Mr. Even Keeled turns into a totally different person in situations like that! I mean, he was still nice and polite, he was just no nonsense. I loved it! It’s a really good thing when the car people want to sell the car more than you want it.

So there you have it. The WAY too long story of my new mom mobile. Now I just have to figure out how to work all the gadgets and buttons.