Okay, so I failed at blogging every day this month.  I’m still going to try, but I’ve already missed a few days.  I’ve been up to my elbows in to-do lists.  I’ve actually been able to get a lot done over the past 2 days!  I put away The Largest Laundry Pile Known to Mankind, made phone calls, worked out, ran errands, returned stuff, cleaned things, baked cookies, cooked dinner, and that’s not even everything. I just got finished making these little cuties for Connor’s class party tomorrow. 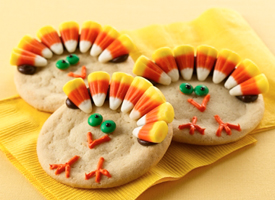 Tomorrow after I take Logan to school, I plan to get a jump start on Christmas shopping!  Speaking of Christmas…

A few weeks ago, our church showed this video:

It’s really something that’s been on my heart since I first saw the video a few weeks ago.  It’s one of those things that I tried to resist at first.  If there is one thing I love, it’s gifts.  I love to give gifts.  I love to receive gifts.  (Five Love Languages, anyone?  Yeah, gifts is my love language.)  I didn’t mention anything to Derek or to anyone about wanting to be a part of the Advent Conspiracy.   I decided to just ignore that little voice.  Well, maybe not completely ignore.  It would be good enough just to give a few extra dollars towards clean water, right?  I don’t really have to sacrifice any of my Christmas presents, do I?

But that little voice got louder.  And I started to think about my kids and the lessons I want to teach them. Then the voice got a little louder.  But really?  Give up some presents?  C’mon God….I’ll pick a kid off the Angel Tree,  I’ll give all my loose change to the Salvation Army bell ringers, I’ll be really kind to other drivers for the entire month of December, and I’ll even give a little extra on Sunday morning.  Isn’t that good enough?

Bu the answer was still no.  It’s not good enough.  Finally, after several weeks of wrestling with this, I mentioned it to Derek.

“So, um, I was thinking, and, um, you can tell me if you don’t think it’s a good idea…I was, um, just thinking about that Advent Conspiracy thing….and, um….maybe we should contribute to it.  You know, not just like write a special check, but acutally do it.  You know, like not get each other presents.” I paused.  I desperately wanted Derek to interject, but I got nothing.  I needed to say it, and say it boldly.

“I really think that instead of us buying presents for each other, we should give that money to the advent conspirary thing at church.”  There.  I said it.  Maybe he wouldn’t think it was a good idea.  Maybe he would say, no, let’s still get each other presents and just give a little extra.

“Yeah, I do think that’s a good idea.  I was thinking the same thing.”

It’s really insane that Amerians spend on average 450 billion dollars on Christmas every year, and for 10 billion dollars, the entire world could have clean drinking water.

I know that our few hundred dollars won’t really put a dent in the water crisis, but I still feel led to do this.  And if there’s one thing I know…if God is leading, we better follow.

4 Replies to “The blogs are in my head”