Connor had his little graduation ceremony this afternoon at school.  And, let me just say that I love how his school did the kindergarten graduation.  I know lots of schools do a big evening event with caps and gowns and the whole nine yards.  C’s school did a 20 minute ceremony in the library with only one of the other classes followed by a simple little class party.  It was perfect.  It was short enough that Camryn and Logan didn’t get antsy.  And the kindergartners are all excited enough with the end of the year festivities and excitement of summer, they really don’t need anything else adding to the craziness.  As the mom a kiddo who a.) goes to bed very early, b.) gets over stimulated extremely easily, and c.)has two other kids, I totally appreciated the low-key but still fun kindergarten graduation.

So, looking at this picture of him lined up on risers with his classmates, can you guess the number one comment I get about Connor?

Here he is receiving his “diploma”. 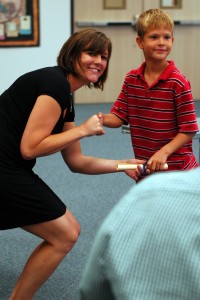 His teacher was great, and I hope and pray his first grade teacher is as good. 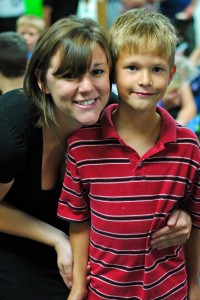 I love his little smile.  That’s they way he always smiles for pictures now.  Oh, and just so you know, I’m not neglecting his hair. He wants to grow his hair long, like Anakin Skywalker in Episode 3 (which conveniently is the only episode we won’t allow him to watch but he still knows the hair.)  I have no problem with the shaggy, surfer look…I think it’s cute!  But the in between phase is a little rough… 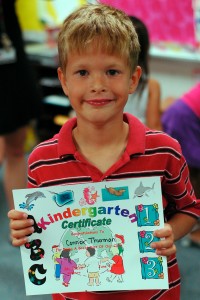 He’s so big now, sitting at his table so confidently. 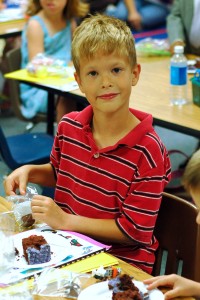 Here he is back in August at the table on his first day of school. 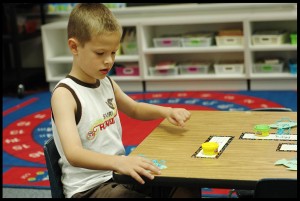 So that’s that! I now have a first grader!  Well, I guess technically he has 4 more hours of school tomorrow, but that’s it.  Then it’s summer….more on that later.

4 Replies to “the graduate”