All summer long, I’d been looking forward to our little getaway with just Connor and Logan.  Of course we love Camryn dearly, but let’s just be honest…at a waterpark, she would be a bit of a fun killer.  She got to stay home and be spoiled rotten by her Mamaw while Derek, the boys, and I loaded up the party van for a few days at Schlitterbahn in New Braunfels.  We arrived on Tuesday afternoon, and the first thing we had to do was explore the hotel.  Connor proclaimed it the best hotel in the entire world, and I have to agree with him that it was pretty awesome!  We stayed at the Courtyard Marriot in New Braunfels.  It was brand spankin’ new, right on the river, and really perfect for us!  You could walk right down to the river, which was so pretty. 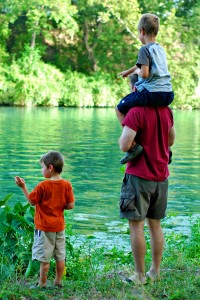 This next picture is so typical of them together.  They act like it’s pure torture to have their picture taken and I really think they scheme in advance to make sure that neither one is ever looking the same direction. 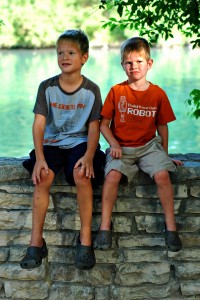 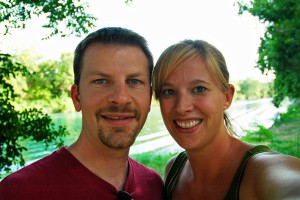 After our exploring time, we headed to Gruene, TX to walk around and eat dinner.  I had never beent there, and it was the cutest little town!  We stopped at a little shop and the boys each picked out a new Webkinz.  Connor picked out a tiger he named Tai, and Logan picked out a clown fish that he named Fishy.  We ate a really yummy dinner at a restaurant by the river, and we all had a great time.  I had forgotten how easy it is to go out to eat without the high chair, sippy cup, and our little food thrower in tow! 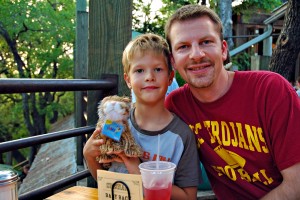 I didn’t take any pictures, but once we got back to the hotel we enjoyed a little night swimming.  The boys thought that was the coolest thing ever.

Wednesday was our big day at Schlitterbahn!  We had the best time.  I have decided that this will be a yearly tradition.  We stayed from open to close, and we all had such a blast riding all the rides.  The boys went on just about everything.  Logan is totally fearless, and while not quite as fearless, Connor is getting old enough that he will try the rides before deciding if he likes them or not.  We were all exhausted after 10 hours at a waterpark, but it was well worth it.  (I didn’t take my camera into the park and I forgot to buy one of the pictures they took of us.  No photos this time.  Oops!)

On Thursday morning, per Connor’s request, we ate a fancy expensive breakfast in the hotel.  It was the one thing Connor really wanted to do, and since it was vacation and all, we obliged.  I should have taken a picture of him with the most expensive breakfast burrito known to mankind.

After breakfast, we headed to Landa Park.  They have a train ride, which is always guaranteed fun for the boys.  I love the look on Logan’s face as the ride started! 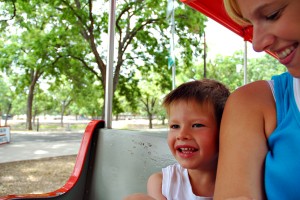 Connor let me take a picture with him… 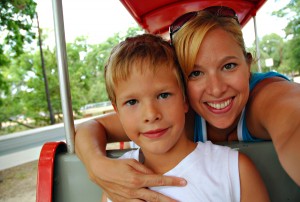 Which was a huge improvement from this little gem.  He was doing the “talk to the hand” thing at me, and I love how you can just see his grumpy little face.   Little booger! 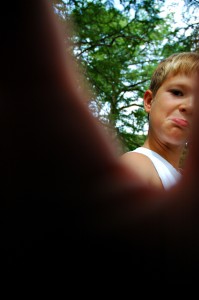 We let the boys play on the playground until they were good and hot and tired.  Then we loaded up and headed home.  It was a really great vacation.  (And hopefully Camryn won’t be too bitter about not going…and us leaving her while she had minor surgery…but that’s another story.) 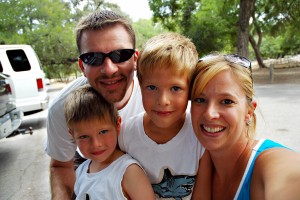