The picture portion of this post is brought to you by the sweetest, cutest, 4 year old I know.  Logan loves to get my camera and take pictures, and I always love to see what he comes up with.

(And just so you know, I didn’t crop any of these.)

Last weekend, I had to clear all the furniture out of the living room to steam clean the carpets after the Great Vomit Fest of 2009.  Derek and I discovered that Wii bowling is really fun when there are absolutely no obstructions.  We played a somewhat embarrassing number of games that day.  (The kids played, too.  But not as much as us!) 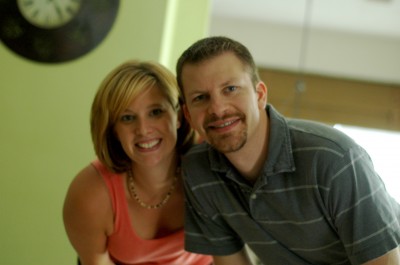 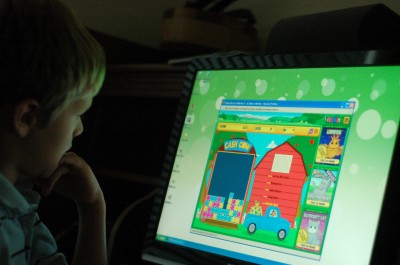 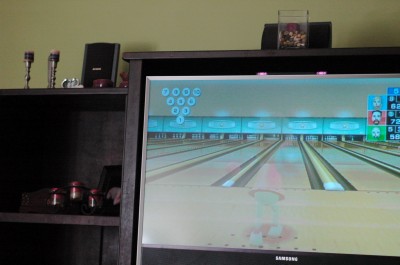 Camryn looks thrilled to have her picture taken here.

Soccer season has started up again.  This season, only Connor wanted to play.  Logan is going to be taking gymnastics.  He wanted to “do that thing where you do tricks.”  I think it’s going to be a great fit for him!

Legos.  It’s all about the Legos.  Usually, they play with the small ones, but everyone once in awhile they dig back into the big ones.

I think I will have to get Logan one of those kid digital cameras for Christmas.  He’s pretty good with mine, but it always makes me nervous!  Do any of you have a kiddie camera?  Are they any good?

So yesterday, we had one last event before school starts.  Derek took the day off work, and we all went down to Schlitterbahn in Galveston with some of our good friends.  It was such a blast!  Even Camryn was able to do a lot of the rides with us.   They have these double tubes that have a bottom in the front seat, so Camryn could ride with us.  She ended up falling asleep twice while riding the lazy (really, not so lazy) river.  The river has a lazy part, a whitewater rapid part, and a wave part.  It’s so much fun!  She could also do a lot of the smaller slides on my lap and some of the family style rides where we all ride in one big tube together.  We all had such a good time, but of course we were exhausted.  It was 12 hours from the time we left our house that morning until we were completely done, kids bathed and tucked in, food put away, showered, etc.  It’s totally worth it, though.  I’m such a waterpark freak!

In other news, I’ve decided to sign Camryn up for Mother’s Day Out this year.  I wasn’t going to…I love the school, but Cami is my baby and I just didn’t think I would be ready.  Well, I’m ready, lol!  This mama needs a break, and I know she is going to absolutely love it.  She is such a social litle thing.  I wasn’t even sure the school would have an opening (most of the classes have a wait list), but wouldn’t you know that there was exactly one spot left on the days I wanted.  Now I’ll be able to do things at Connor’s school, I’ll be able to grocery shop alone, and I’ll just be able to catch my breath a bit.  I have been feeling really worn out…almost burned out lately.  I think having 10 hours a week alone is going to be a great thing.

I have to admit that I totally struggled with some major mommy guilt over this decision.  I didn’t sign the boys up this young (Logan was 2.5, Connor was almost 4.)  I feel like I should be able handle everything better than I do and needing a break makes me a failure.  But after a talk with a good friend I realized that I really can’t compare life with 1 child, or even 2 kids, to my life now.  I don’t have to be a stay-at-home-mom hero.  It’s okay that I need time, that I feel overwhelmed, that I struggle with keeping my cool, and on top of that, my better half has a job where he travels all the time.  It’s okay.  I’m okay.

Talk to me Wednesday, though.  That will be the first day all 3 are gone at the same time.  I’ll probably be here, sitting on the couch, trying to figure out how to deal with all the silence and free time.

(and isn’t it funny how 10 hours of free time seriously feels like all the time in the world?!)