So Logan and Camryn had their first day of school this morning.  As you can see, they were absolutely thrilled. 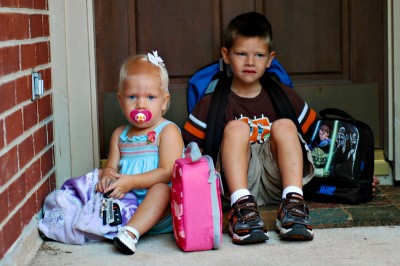 And, I just want to show y’all the evidence of the Houston humidity.  This is what happens to my camera when I first go outside.  Nice. 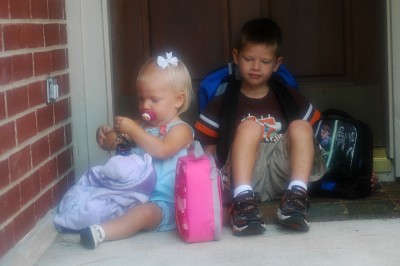 Despite the glum face, Logan had a really great day.  I love that he has his same teachers from last year.  This is Logan’s third year at the school, so he’s really comfortable there and had tons of fun today.

Camryn did well, too.  She cried when I dropped her off, which I totally expected, but it was short lived.  According to her teachers, she had a really good day, and the only other time she cried was during a diaper change.  That didn’t surprise me at all…she hates having her diaper changed!

As for me…it was weird having no kids at home!  I went to breakfast with a few friends, went to Sams (where at one point I totally panicked for a split second wondering where Cami was), and then I went home.  That was when it was weird…it was just so quiet!  I did a bit of cleaning, but I also read a magazine, watched some tv, started a sewing project, and caught up on blogs and stuff.  It was nice!  I was so ready to see my babies when 2:00 rolled around, and it was the perfect little break I needed.  Especially since Derek has been gone this week.

It feels so good to be getting back into our fall routine, although it’s definitely been an adjustment.  As a kid, I always liked the start of the school year, and even as a grown up, that has not changed at all.  It makes me want to go school supply shopping and stock up on notebooks and pens and make lists and get a nice, fresh start.  I love it.

One Reply to “One last first”