Logan is crazy. The boy never stops from the moment he wakes up until the moment he crashes at night. I don’t think I truly understood the phrase all boy until Logan came along. He is no stranger to accidents, and pretty much always has multiple bruises and scrapes with no idea how he got them.

So when Connor and Jake (our neighbor and one of C and L’s favorite people in the world) rushed into the house and informed me Logan was bleeding and crying, I didn’t really panic. I calmly walked into the back yard and peeked over the fence into Jake’s yard to see what was up.

It was a real doozie, one that led me to hop the fence, which is definitely not something I’ve done in many, many moons. Logan was sitting in the grass with Jake’s mom, bleeding fairly profusely from his nose and crying like I really haven’t heard him cry before. I’m not really clear on the details…nobody really saw what happened…but, Logan basically did a face plant from the top of Jake’s swing set/play house thing (probably about 6 feet high). What Logan was doing on the outside of the fort part is anyone’s guess. Nobody (including Logan) has any idea what exactly what he hit his face on. But my poor Logan bug…he is a mess! His poor little nose and mouth are all swollen. According to Doctor James (my brother), there is a good chance he broke his nose. Not much we can do about it…just wait and see how it looks in about a week and go from there.

Of course I made Logan take some pictures. I don’t think the pictures really do it justice. But you can definitely see his unhappiness at the entire situation. 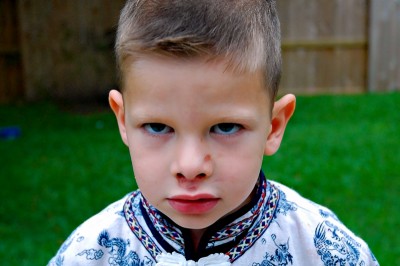 Poor Logan.  Boys…farts and face plants.  Pretty much sums them up!