When I pulled out Camryn’s baby book after her 15 month appointment, I realized that I totally dropped the ball on keeping up with her stats and development between 6 and 12 months.  I thought to myself “good thing I have my blog where I’m sure I wrote these things down!”  Nope, not so much.  Sometimes I think that blogging my baby girl’s height and weight and achievements  is a little boring, but I realized two important things.  One, I better blog this stuff if I ever want to remember it.  And two, I really like reading about my friend’s babies so surely I won’t bore everyone single one of my readers.  Right? 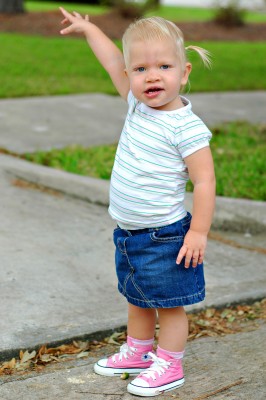 She weighed in just under 26 pounds and is 31.5 inches.  Her favorite foods are pears, peaches, strawberries, green beans, ham, chicken nuggets, turkey hot dogs, cheese,  goldfish, graham crackers, and cinnamon toast.  She doesn’t really care for carrots or eggs, although I really need to keep trying those.  I should probably try to feed her peas, too, but I have such an aversion to them that I have a hard time inflicting them on her.  Her hair is slowly and surely growing in and she sports a pretty wicked white-blond mullet that looks super duper cute in little piggies.

She loves people, and still prefers guys over girls most of the time.  We were at Chick-Fil-A earlier this week, and she totally walked up to a grandpa in the kids area and insisted that he pick her up.  (He was there with his grandkids, by the way. He wasn’t a skeezy old man hanging out in a kids play area!)  She loves her daddy and her brothers, and she and Logan seem to have an extra special thing going on lately.  But despite how much she loves the boys in the family, the word she says the most is mama.  She also says uh-oh  and dada, and she does lots of communicating by squealing (every time she sees the cat), grunting, pointing, and using her baby signs for eat, drink, and all done.  Back when she had her tubes put in last summer, they found that she was having some hearing loss due to all the fluid and ear infections.  I expect her language to really take off over the next 6 months. 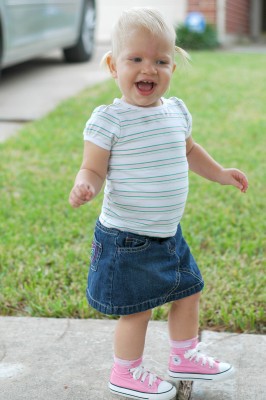 She no longer uses her paci, and is doing great without it.  She takes one nap a day, usually for about 2 hours and sleeps from about 7:oo to 7:00 at night.  She has really been the best sleeper ever and that thankfully hasn’t changed!  She is loving her days at Mother’s Day Out.  It took her awhile to adjust, but now she absolutely loves it, and her teachers love her.

She is just a delight and I feel so incredibly blessed and thankful that God gave us such a precious gift.