If you aren’t a friend of mine on Facebook (or if you are but don’t read…), you probably have no idea what my title means.  Let me just start at the beginning…

I mentioned in my last post that Camryn was running a fever when I picked her up from school on Wednesday, and I also felt like I was coming down with something.  Thursday was a hard day…Camryn felt awful and by early afternoon it was clear I needed to get her to the doctor.  She was spent much of the day crying inconsolably, and on top of that, I was running a bit of a fever and really not at my best.  Thank goodness Connor was in school and a good friend of mine picked Logan up at 10:00 that morning and kept him until Derek could pick him up that night.  I seriously have the best friends!  Anyway, I took Camryn to the doctor on Thursday afternoon, suspecting either strep or hand, foot, and mouth disease.  The doctor said it was hand, foot, mouth and sent us on our way.  By Thursday night, I was running a 102-103 degree fever, and Friday morning I felt even worse and went to see the doctor.  They tested me for the flu (negative) and for strep (positive).  I was pretty sure it was strep and was so thankful to start on antibiotics!   I was also thankful that Derek was able to stay home on Friday to help with Camryn and Logan.  Camryn was still a mess…barely sleeping, not eating, hardly drinking, crying all the time, just plain miserable.

I thought it seemed a little odd that Camryn had one thing and I had another yet our symptoms were exactly the same.  I called the doctor, and he decided that it would be best to go ahead and treat Camryn for strep as well.  Wouldn’t you know, 24 hours after both of us started antibiotics, we are both functioning (fairly) normally again.  My throat is still really sore, but I feel fine.  I think it’s the same for Cam.  She is still not eating much, but she is acting pretty much like her jolly old self.

The good thing about being so sick is I caught up on tons of tv shows.  I watched all of this season’s episodes of Desperate Housewives and Flash Forward.  I watched 5 episodes of Modern Family (hilarious!), this weeks Grey’s, and The Office (Dwights karate fight with himself made me laugh so hard, despite the fact that I felt so horrible.)

Since I’m back to functioning as of yesterday afternoon, I felt the need to do all the laundry, vacuum the house, make chicken spaghetti for a church potluck, and even attempt a Christmas card photo of the kids.  I did get a pretty cute one, which I’m not going to share, but check out these two awesome out takes, which there were plenty of.  I took 35 photos, and deleted all but 4 of them.  And 2 of those keepers where these. 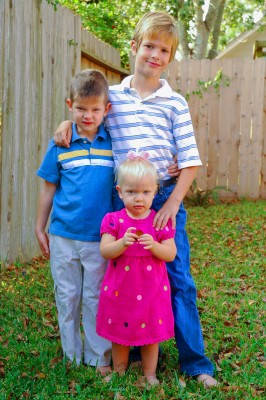 Seriously, how awesome is Logan’s face here!  It made me laugh out loud so I knew I had to keep it and blog it.   And it looks like a mug shot of Camryn.

And then there is this gem.  So very typical.  Just for the record, Connor tucked in his shirt and put on a belt by his own accord.  And he came this close to also buttoning his top button.  He’s his own person, that’s for sure! 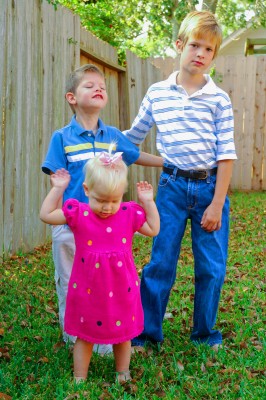 Hope everyone had a great weekend!  This next week is going to be a busy one with lots of Thanksgiving festivities at the kid’s schools and preparing for our Thanksgiving trip.  I can’t believe it’s almost Thanksgiving, which means it’s almost Christmas!  Woo hoo!