I know I’ve mentioned it, but Camryn loves to be outside with “her boys” as we call them. I looked out the window one day last week and saw them all being so sweet to Cam, giving her all this attention and she was just eating it up. 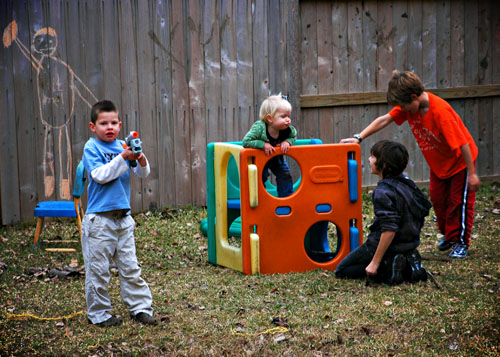 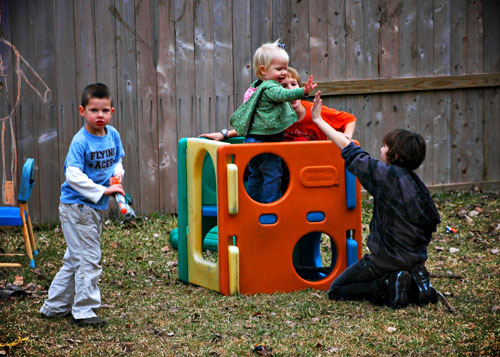 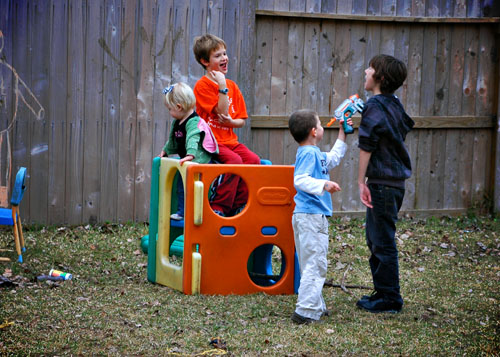 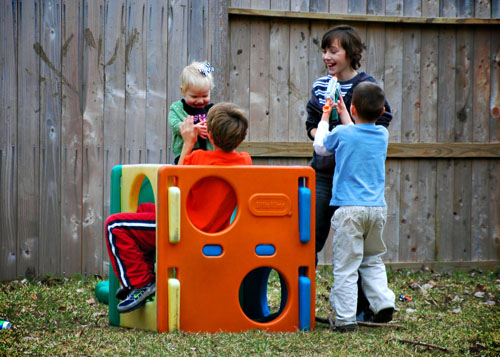 And I promise Logan is a really sweet boy even though he is wielding a gun in all these pictures…boys will be boys!

Camryn is 18 months old today!  A year and a half…it’s gone by so fast.  She is so much fun, but she is also at that scream, yell, and point phase.  I’ll be happy when she starts talking more instead of just yelling and pointing!  Because, just take my word for it, the girl is LOUD!  Just imagine the sound this picture would make: 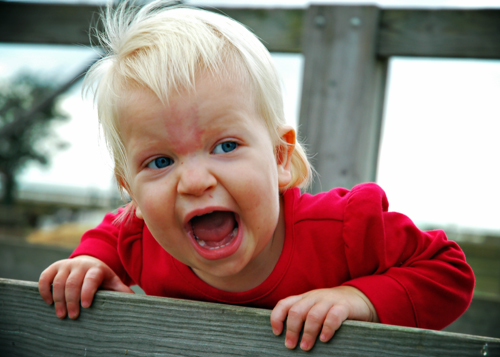 (My mom is going to get such a kick out of that picture because there is a very similar one in a frame at my parent’s house.  Let’s just say that we all know who Camryn got the loud gene from…)

She had her 18 month check up yesterday and weighed in at a whopping 28.5 pounds and measured 33.75 inches.  She’s over the 90th percentile for both.   She’s my big girl.  Here are a few things about her that I want to remember (just for my own record, because let’s just be honest, the baby book is definitely lacking for the third baby!) 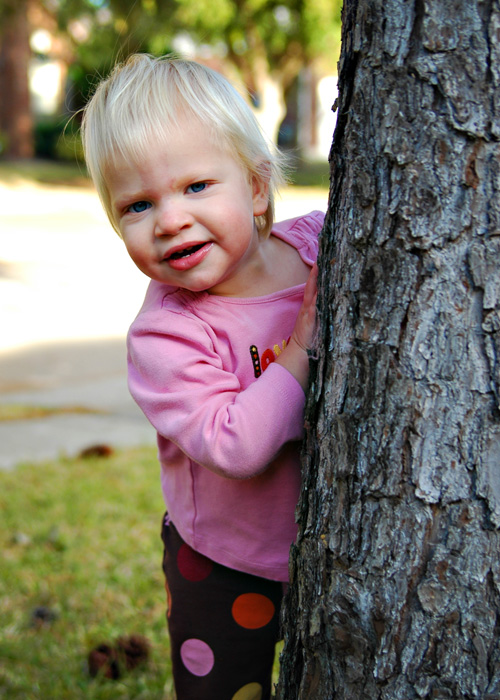 Her favorite word is dada, and he’s her favorite person in the world.  It is the sweetest thing seeing how much she loves her daddy.  In general, she still prefers men over women, although she loves my friend Laura and her two teachers at school.

She pretty clearly says shoes, bow, mama, bye bye, bus, baby, and a few other words.  She is trying so hard to say Connor and Logan, but it just comes out dada.  She mimics a lot of sounds that aren’t quite words yet, and I think in the next 6 months she’ll be a full fledged talker.

She is so easy to put down to bed and for naps.  She just wants her blanket, a baby, and a sippy cup of water.  98% of the time, she just lays right down and goes to sleep.  She’s been like this since she was a tiny baby, and it’s great!

Her favorite foods are pears, peaches, oranges, cheese, turkey, chicken nuggets (especially from Chick Fil A…she’s got good taste), tomatoes, raisins, and fruit snacks.   I would say 95% of what she eats falls in those categories.  I haven’t been as good about introducing new foods to her…it’s just so much easier to feed her some turkey and cheese at 5:00 when she’s hungry than to listen to her whine until dinner is ready and have her throw half of whatever I fix on the floor.  I think the whole food thing is one area where I have relaxed a ton since Connor was this age.   Most nights, she eats her own dinner while I fix the real dinner, and then she sits in her chair and makes her brothers laugh while we eat.

Her hair is really starting to grow in, and as you can see, it’s as white as ever!  She gets so many comments on it.  It is pretty much as blond as hair can get!  I have even given her a few little trims.  (And her hair usually looks better than it does in these pictures…she has enough hair that she gets real bedhead now!)

She is a little social butterfly.  She wants to be in the middle of the action, and loves to wrestle around with Connor and Logan.

She doesn’t watch tv.  The only thing she will come even close to watching is Veggie Tales.  I suppose that’s not really a bad thing, but there sure are times when I wish it would occupy her for a bit!

Her favorite toys are her babies.  She also likes to put things in little purses and carry her treasures around.  She is so girly in that way! 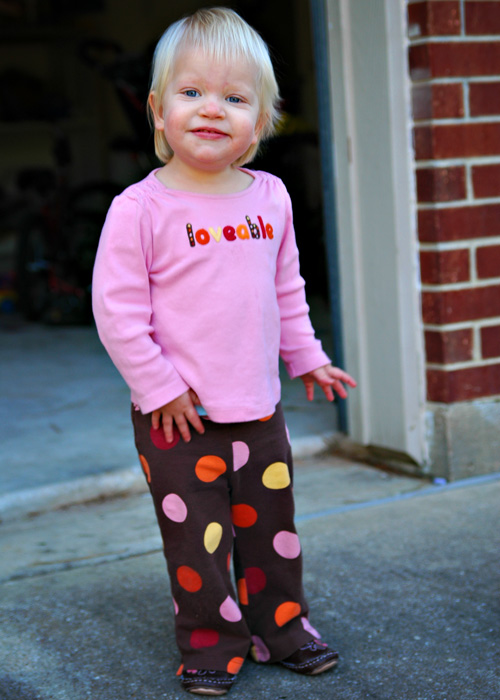 She is spunky and sweet.  She’s  a little love-bug, full of kisses for everyone (but especially me).  She is very endearing and such a happy little person.  She definitely has a voice of her own and doesn’t hesitate to express herself.  We’ve already had some good all-out tantrums on the floor.  But this ain’t my first rodeo and I don’t think it will take her long to figure out that doesn’t work, nor does it phase me.  🙂

Happy half birthday, sweet girl!  I am so thankful that you are mine.

I’m so excited to have my website just about finished!  There are a few little things to tweak here and there, but overall, I’m so pleased with how it’s turning out.  Now, if only this freezing weather would go away then I could really get things going!  I took the kids out to a new possible location yesterday, and we barely made it 15 minutes before we had to pack it up and get warm in the car.  I don’t know how people in the north live through this kind of weather every year!

Not much point to this post…just sort of testing out the blog feature on here.  I’ll just end with this picture I took of Camryn earlier this week.  I just love the serious look on her face!

Camryn has officially reached the playing with babies age. She carries them around almost constantly. She sleeps with them, pushes them around in her stroller and shopping cart, rocks them, kisses them, takes them outside with her, etc, etc, etc. It makes my heart so happy! I was all about playing babies and playing house. Forget Barbies…bring on the Cabbage Patch Kids. In fact, my mom still has all our old CPK’s at her house. When we were home for Thanksgiving, I brought my favorite one back with us for Camryn to play with. I named her Shelby Christine when I was a kid, but I’m sure Camryn will eventually name her something else. If she named her right now, it would probably be “da-da” since that is her favorite word and her favorite person in the world.

Yesterday, Camryn was so cute with one of her babies out in the backyard. I had to take some pictures, and since my blogging has been a bit lacking over the past few weeks I figured they would make good blog material.

First, she carefully gets baby all settled in the world’s oldest Powerwheel Jeep.

And then they are off!  But just for pretend because the oldest Powerwheel Jeep ever no longer runs.  And that’s a good thing….Cami, babies do not belong in the front seat!  And especially unrestrained! 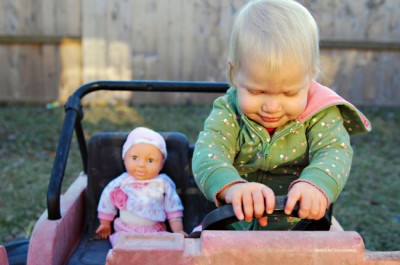 Don’t worry, baby.  I’ll catch you before you fall all the way on the ground. 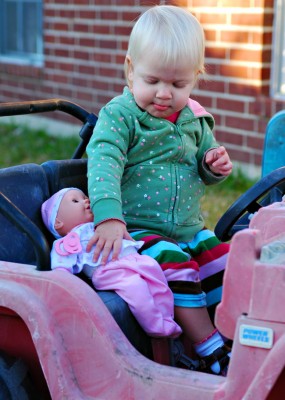 Camryn thinks she is such big stuff.  And all the while, baby is there by her side.

Don’t do it, Cami!  Yes, babies can be very frustrating, but just lock yourself in a room and take some deep breaths! 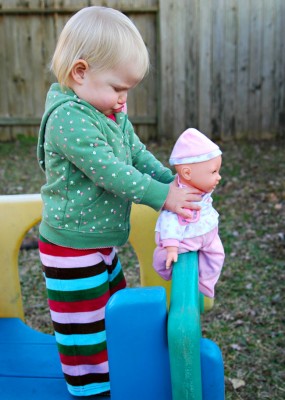 Just kidding!  (I LOVE this picture of her!)

But really, playing with babies is serious business. 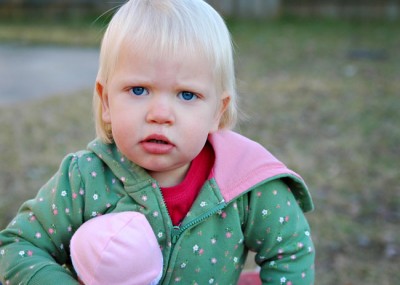 I love seeing her play with her babies!  I know I am totally biased, but it’s just the cutest thing to see her act all girly and nurture things.  She is so different than the boys, that’s for sure!

Before Christmas, I got to take pictures of my friend Angela’s kiddos.  They were seriously the best little models ever!  They were so easy going, and as you will see, they are super, super cute.  Taking their pictures made me so excited to get going with the photography business!   Which, just as a little update, I really am going for it!  I’m working on a website with Shauna, and I’m hoping soon everything will be up and running.

Anyway, back to Bailey and Brock… 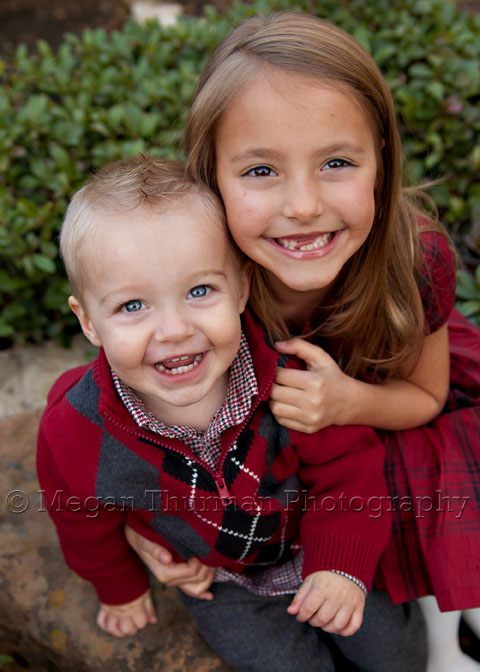 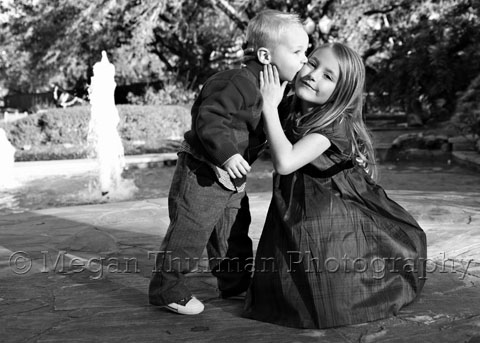 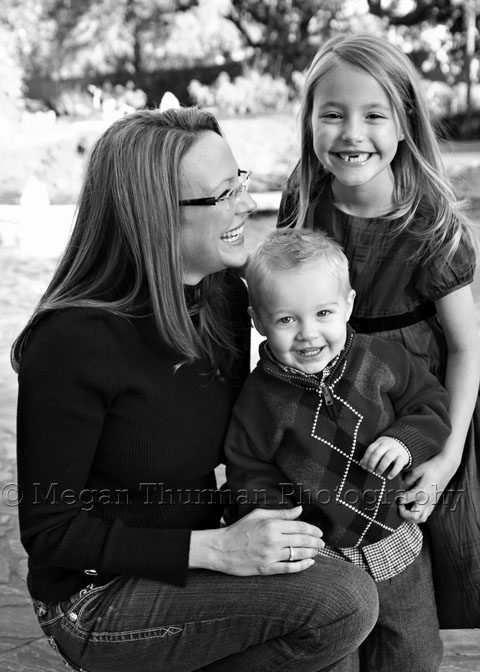 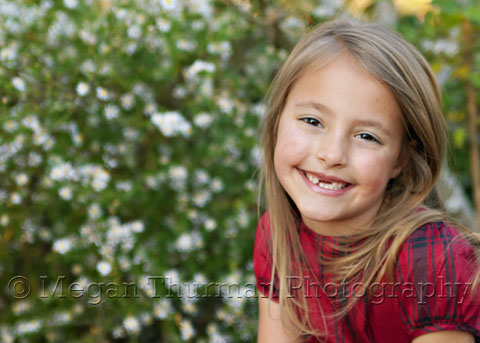 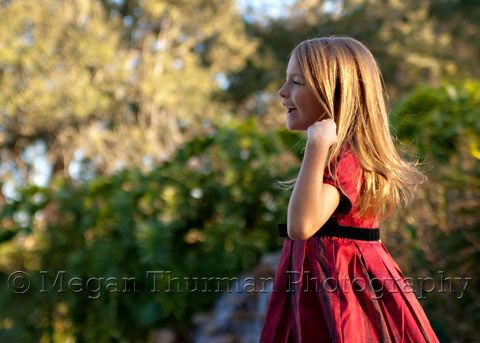 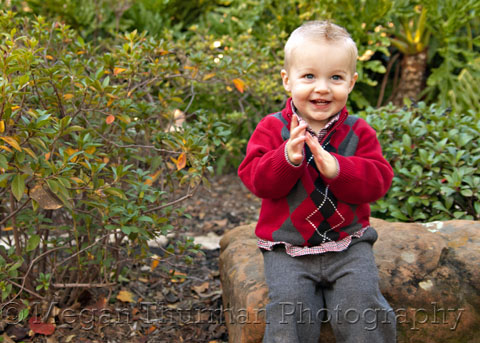 I had another photoshoot for a friend the other day and I promised her that I would post a few on the blog tonight.  It’s taking me a bit longer to get through them and get them edited because there are a lot of cute ones, it was a big group, and we’ve been busy trying to cram in all the fun we can handle before school starts by going to the movies yesterday and going to Schlitterbahn today.  But, here are a few of the ones I’ve edited so far.  It was a bit chilly (well, for Houston…it was 50, I think), but it was really fun!  Thanks for letting me practice on you guys!

The main reason for the photoshoot was to get one of the whole crew.  I think we got one! 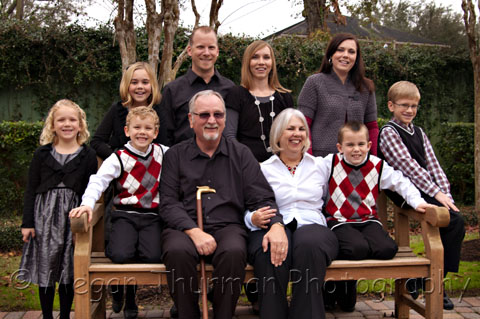 And another one of the whole group that I thought turned out well.

I love how his arms are draped over his mom and sister.  So sweet! 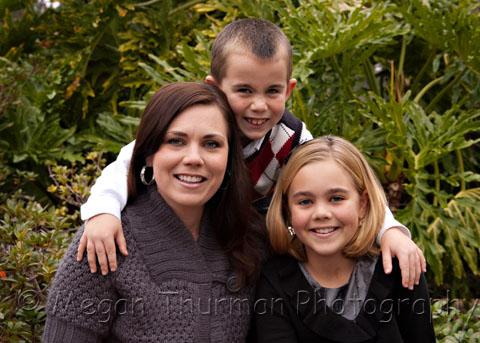 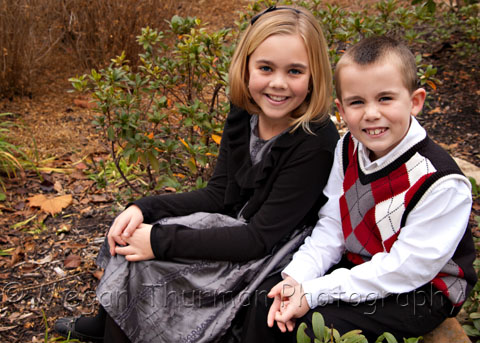 Isn’t she beautiful?!  She’s only 10, and already such a beauty. 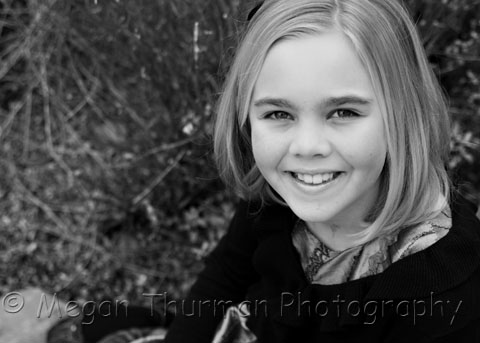 How cute is this?  Two boys and a girl…I have a soft spot for that combination of kids. 🙂 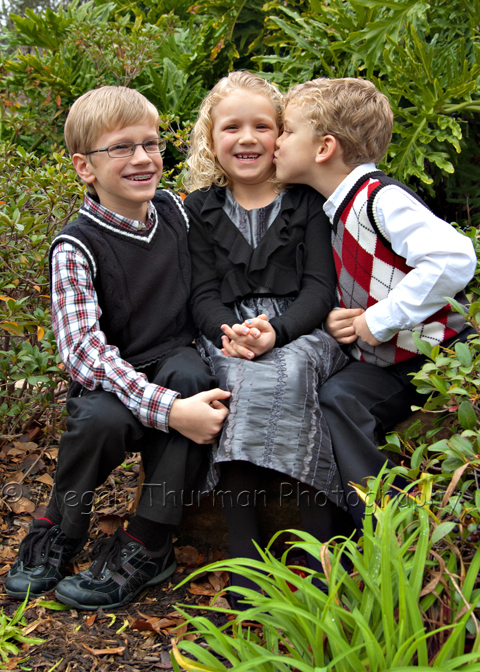 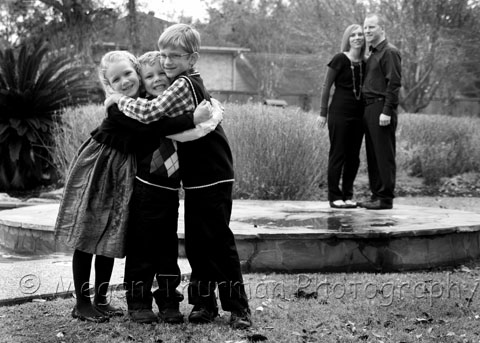 These are just a handful of the pictures I took, and I keep going back and looking at them and finding new ones to love.  Thanks again, Brook, for trusting me to take pictures of y’all!