For the first year ever, my kids were both really excited about the first day of school.  The Friday before school started, we headed up to the school to meet their teachers.  Connor and Logan are both really excited about who they have this year, although Connor was a little disappointed that his good friends from class last year are all in a class together and he is in a different class.  But, after a pep talk from his third grade teacher about how great 4th grade was going to be for him, Connor was all smiles and ready to go.  I just know this is going to be a great year for both of them!

I love the beginning of school.  I love the fresh start and getting back into our school routine.  I love catching up with the teachers from years past and the other moms that I haven’t seen all summer.  That was actually especially fun this year since a lot of people did not realize I was pregnant and now I’m about to pop!  Peoples reactions are great–a mix of shock and happiness and usually some laughter, which is pretty much how we’ve felt for the past 8 months.

I started a tradition a few years ago where I make homemade cinnamon rolls on the first day of school.  I feel like this balances out all the mornings the kids scarf a granola bar in the car, or if you’re Logan, ask for a bowl of Lucky Charms and then on the sly only eat only the marshmallows and leave the flakes for me to find later.  I’m glad that on the first day I sent them off with a special breakfast so I didn’t feel quite so bad when Logan ate marshmallows only on the second day of school.

Our morning went relatively smoothly.  We had plenty of time for the requisite first day of school pictures, and I even thought ahead and placed my camera outside 10 minutes early so it wouldn’t fog up in the humidity like it does most years.

Connor, my big 4th grader.  Funny little story: when we went to meet the teacher, Connor’s teacher stuck her hand out to Logan, not Connor, to introduce herself.  She thought that Logan was the 4th grader and that Connor was older.  It was pretty funny!  In her defense, Connor is 5 feet tall and is still taller than most of the other kids in his grade.  And also, totally unrelated to his height, he lost his last baby tooth a few weeks ago.  I’m only throwing that in here in case someday I wonder when he lost his last tooth.

Logan, my second grader, mistaken for a 4th grader, all smiles and still sporting his early morning squinty eyes that I love so much. 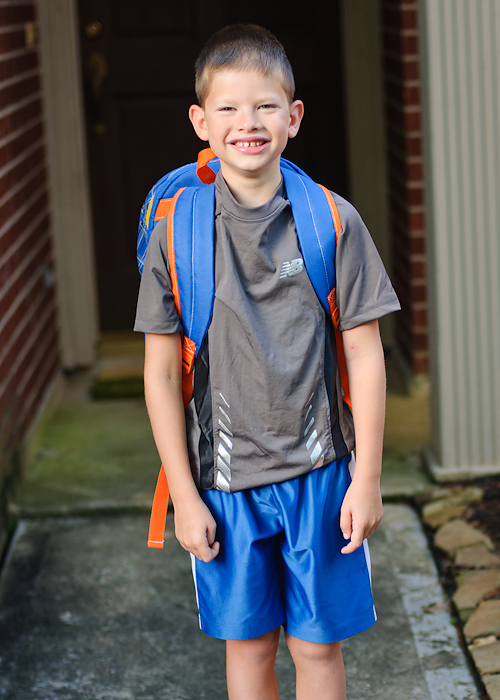 See?  They are friends!  There was no wrestling, no bad attitudes, just the casual arm over the shoulder and smiles! 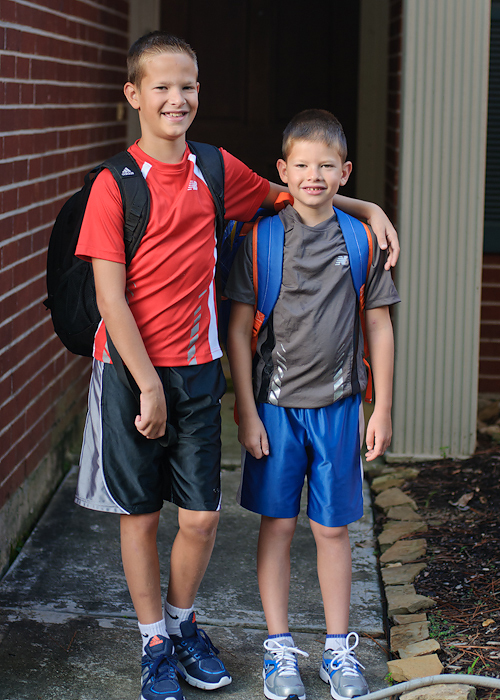 Camryn doesn’t start pre-k until later this week, but she couldn’t be left out. 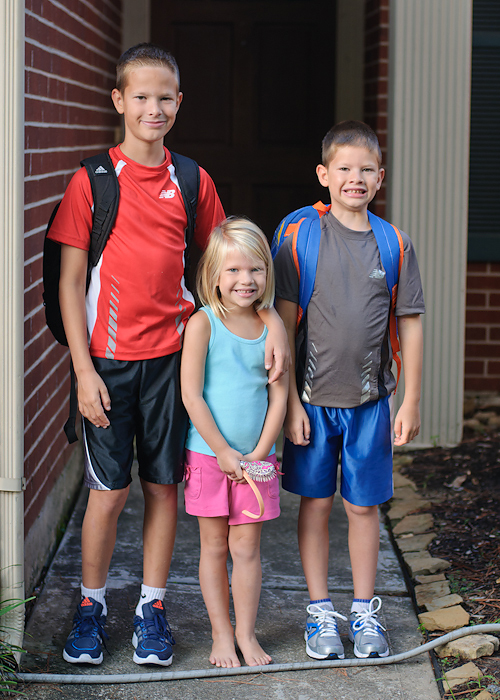 I will not take any credit for this next picture.  It was all them.

Please notice Camryn’s bare feet in these pictures, because I definitely did not until we were halfway to school and she piped up from the backseat that she didn’t have any shoes on.  We always park and walk in the first day, so you better believe that she walked in with bare feet.  I figured having two out of three kids fully dressed good enough.

Next stop, 4th grade hallway.  Connor was one of the last kids to arrive, so I decided just to snap a quick picture from the hallway. 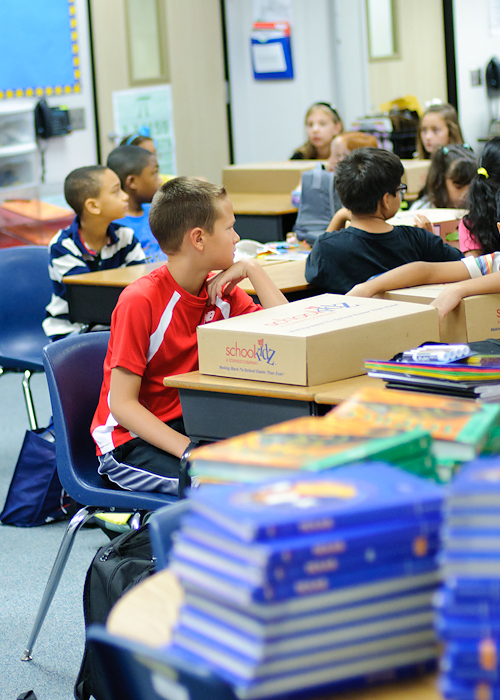 See that box on his desk?  I would like to state for the record right now that I will forevermore order school supplies from the PTA instead of trying to track down the brand, size, color, and number of items they all need.  After resisting the school supply boxes for years because I love nothing more than the aisles of fresh, new school supplies, I have now seen the light.  No more fighting the crowds, no more angst over not being able to find a red composition notebook with wide ruled paper, or running all over town to find the right size construction paper.  No more, I say!  Here’s my check for $35, and that pretty box will be waiting for each of them on the first day.  Hallelujah!

Once Camryn and I arrived back home, the quiet set in.  The mix of pregnancy hormones coupled with the fact that we really did have a wonderful summer caused a bit more melancholy on the first day that what I normally experience.  Camryn and I battled the back to school blues with a little last minute school shopping for her plus lunch at Panera.  I’m thankful that Camryn wasn’t starting a big milestone school year or I might I have ended up in a puddle on my couch!

Finally it was time to get the boys off the bus.  I have taken a picture of them getting off the bus every year on the first and last day of school, which means by now they see it coming. 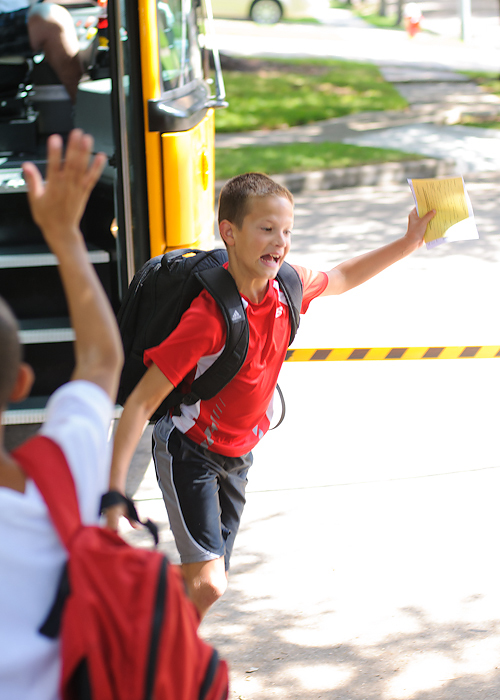 Connor’s face pretty much sums it up.  They were thrilled to be home, and even better, they were ready to go back the next day.  In fact, the whole first week was great.  Five days down 175 to go.