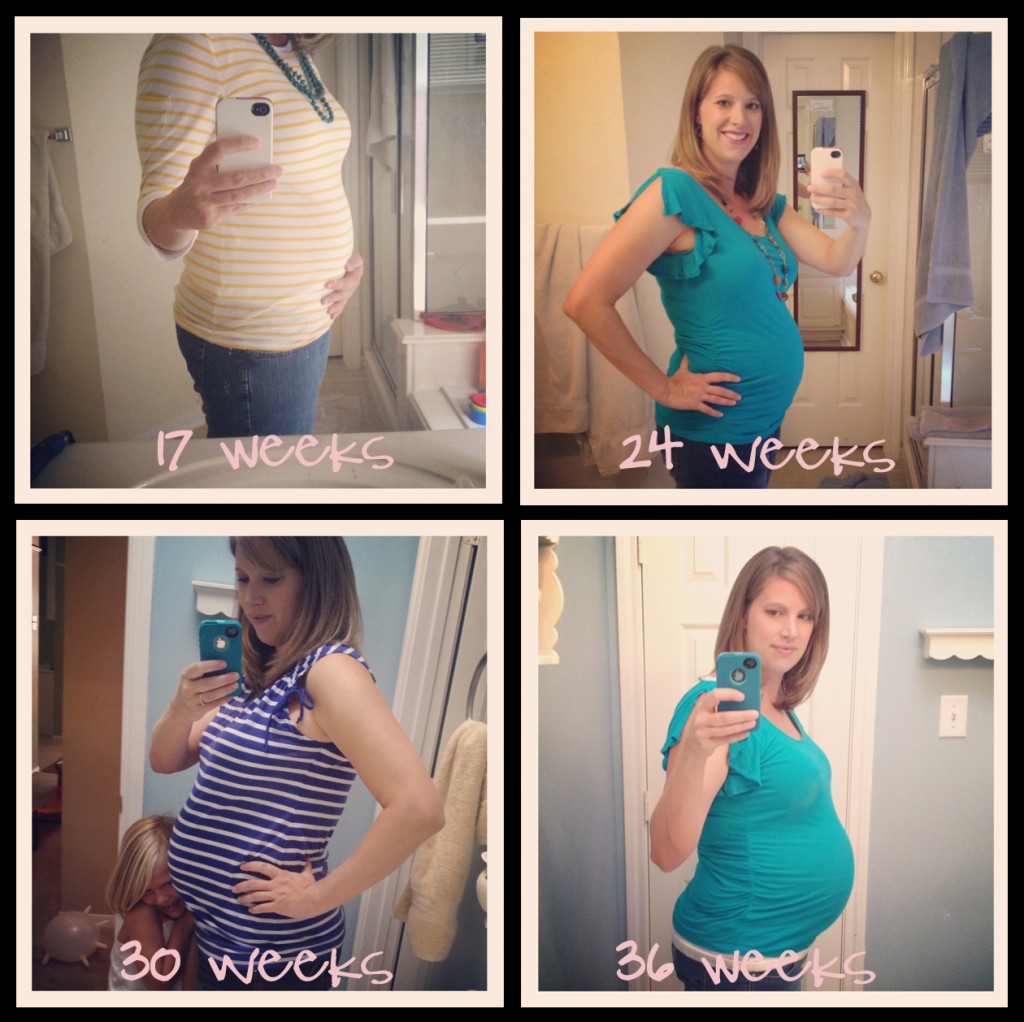 It feels a bit like the final baby countdown is on.

Connor was born at about 37 weeks.  Logan and Camryn were both born just a day before their due date.  Will this little guy hang out until October 11?  Or will he come early?  Who knows!  Part of me really hopes he’s just a week or two early.  I’m trying hard to enjoy these last few weeks, these last baby kicks and nightly hiccups.  But let’s just be real.  This isn’t the most comfortable stage of life.  I can’t wait to be able to bend again, to wear normal clothes, and most of all, to meet this little guy!

This pregnancy has been different from my other three in lots of ways.  My morning sickness was fairly mild (which actually made me think from the beginning that this was another boy.  I was super sick with Camryn.)  But man, the first trimester exhaustion was at an all time high.  And it didn’t end at 12 weeks, but carried on well into the second trimester.  I would crash on the couch every night the minute I got the kids tucked in.  I was worried about the summer, about how I would keep up with everyone and have the energy to get through it.  Luckily, the kids are older which means I can set them up with video games or movies (or a nap for Camryn) and take a nap myself.  I’ve napped more this pregnancy than ever before, which has been a great luxury.

I’ve had only a couple of cravings and food aversions.  I’ve eaten boxes and boxes of cereal.  When nothing else sounded good, I would turn cereal.  My favorite is Life with fresh strawberries.  But really, most of the time, any cereal will do.  I had an aversion to Chinese food for awhile, but I’m back to loving Pei Wei.  The only thing that really turns my stomach is chili.  Even just thinking of it makes me gag a little. Except for a couple of times that I craved chili cheese dogs.  But chili from a can is way different from homemade chili, and it’s the homemade stuff that grosses me out.  So weird.  Because really?  Could chili from a can be any more disgusting?

This little guy seems to be less active than I remember the others being.  It could just be because I’ve been so busy taking care of three other kids, but maybe it just means he’s going to be a super chilled-out, relaxed kid.  That sure would be great!

I’ve had more appointments than ever before.  I’ve always done the first trimester genetic screening, and it’s never turned up anything usual.  This time the results showed a higher risk of Down’s Syndrome than is typical for my age.  And so began the extra appointments with the maternal and fetal specialist.  I’ve had ultrasounds about every 3 weeks since 17 weeks.  Thankfully, everything looks great with our boy–his heart, brain, organs, etc. are all normal.  There are all kinds of markers they look for on the ultrasound for Down’s, and he doesn’t have any of them.  Of course, the only way we can totally rule anything out is with an amnio, but we declined any further testing.  We trust that God is in control and has been from the very beginning.  We love our son, and he is a precious gift no matter what.

The thing with all this testing and ultrasounds is they’ve noticed some things that, to quote the doctor, “may or may not be an issue.”  Our little guy has a calcium spot on his liver.  Not much we can do about that except wait until delivery and have the pediatrician check it out.  The promising thing is one calcium spot isn’t usually a huge deal, or even indicative that there is for sure something wrong.  But it’s there.  About a month ago, my amniotic fluid level was out of the normal range.  Thinking back on my other pregnancies, I think I’ve always had a lot of fluid, but it’s just never been measured or monitored before.  And as of two weeks ago, his belly was measuring a couple of weeks behind the rest of him.  Again, not necessarily a problem, but it’s another thing to keep an eye on.  I now spend about an hour every Friday morning hooked up to monitors for a non-stress test.  Last week was my first one, and it was really so relaxing, plus I loved listening to his heart beat on the monitors.  For the next 4 weeks (or until I deliver) I will have 2-3 appointments every week.  I’m so thankful that the kids are back in school, plus we have wonderful friends who have helped us out so much over the summer!

I should note that my regular ob isn’t too worried about any of this stuff, which is so calming and reassuring.  And except for a few moments of panic and worry about the baby not being healthy, I really have felt such a peace about everything.  It’s totally, 100% out of our hands.  It’s been a huge reminder that God is in control.  There is nothing we can do, and worrying never changes anything.  All we can do is pray and trust.  It’s been a faith building few months for me, and that is always a good thing!

So there you go.  The pregnancy has now been officially blogged.  All that’s left to do is, well, actually a lot.  Finish the room, make sure the pack-n-play/bassinet still function, pack a hospital bag, settle on a name…I’m sure it will all come together in the end.   I can’t wait!