I would say it’s hard to believe that Sullivan is already one month old, and part of me is amazed that a month has gone by already.  But maybe I’ve just come to terms with the fact that time is flying, so it doesn’t seem as mind boggling that he’s a month old.  Some parts of this month have honestly dragged by.  But I know that I will look back in a few years (or maybe even sooner) and wistfully remember the beginning days, and I’ll marvel at the fact that he’s already so big.  Time is funny like that, I think especially when it comes to raising kids.

So at one month old, Sullivan weighed in at a whopping 6 pounds 6 ounces.  To compare with the other kids, they were all over 9 pounds at one month old.  Sullivan totally looks like a newborn still.  When we are out and about, the number one comment is always about his hair, quickly followed by questions about how old he is, how big he is, and how big he was at birth.  While he is definitely still a little peanut of a guy, he has officially outgrown preemie diapers (that happened at about 2 weeks old), and now his preemie clothes are all too small.  I squeezed him into one of my favorite preemie onesies for the last time today.  From here on out, we are fully in newborn clothes!

Easy things about Sullivan so far:

-He’s a good sleeper, content to sleep just about anywhere as long as he’s swaddled up really tightly.  He even sleeps good in his bassinet.  Of course, like most newborns, he wanted to sleep more during the day than at night, especially at first, but now at night he does pretty well, giving us a solid 4-5 stretch between feedings.  In fact, while he’s getting better about this, I have to wake him up a lot to eat during the day and even at night.  I never ever woke up the other kids at night, but they were also not 5 pounds.  As much as I would love to let him sleep (and a few night I haven’t heard my alarm and I’ll awake with a start after 6 plus hours!), he really needs to eat and grow.  On our typical nights lately, he nurses at about 10:00, between 2:00 and 3:00, and again between 5:00 and 6:00.

-He’s so darn loveable and cute and the kids are crazy about him!  They are all willing to help out, and they all want to snuggle and hold him daily.  It’s really sweet.

Not-so-easy things about Sullivan so far:

-He is hands down, no question, my laziest and slowest eater ever.  Nursing takes forever.  He falls asleep constantly.  Not such a big deal, I guess, except that I have 3 other little people needing me.  Plus I don’t really love nursing but I love that it’s free and I know it’s the best thing for him.  But it’s draining to spend 8-10 hours (or more) a day feeding him.

-This doesn’t really have to do with Sullivan exactly, but my day usually starts after his 5:00 a.m. feeding because by the time he is done eating, it’s nearly time for the big kids to get up and get ready for school. There is always sleep deprivation with newborns.  I totally expected it.  But, it’s at an all time high this time around.  On a good night I’ll get about 6 hours of broken up sleep.  And there is definitely no sleeping during the day while he sleeps.  I tried to take a nap one day and failed miserably.  There are too many other things that need my attention for me to relax and nap during the day.  The good thing is I can (most of the time) keep this part in perspective.  He will eventually sleep through the night, and I really think that will happen just as soon as we can get a few more pounds on him.

-Hello, crazy emotions!  I’m always a bit of a basket case after giving birth.  And I’m not sure if it’s worse this time, or if I’ve just forgotten what I was like the other times.  But I think I’ve shed more tears in the last month than I have in the last 4 years combined.  I *think* I’m coming out of it, and on good days, it seems the crying is behind me.  It almost always happens at night, around the time we’re trying to get the kids to bed and Sullivan is cranky and I’m exhausted.  It’s so completely overwhelming.  What’s crazy about it is I realize how nuts it is, and yet it’s completely uncontrollable.  A lot of times, Derek and I will be laughing about how ridiculous my emotions are at the same time that I’m crying.  He is a saint for putting up with this time and time again!

So, overall, if I had to sum up the last month, I would say it’s been crazy and busy, filled with laughs and lots and lot of tears.  It’s been overwhelming in both good and not-so-good ways.  But even with the ups and the downs, I wouldn’t change a thing about it.

Now for 1 month pictures!  So many of these make me laugh.  The crossed eyes, spazzy arms, and then a sweet little smile.  I love this kid.

Long, skinny chicken legs and the best baby hair ever. 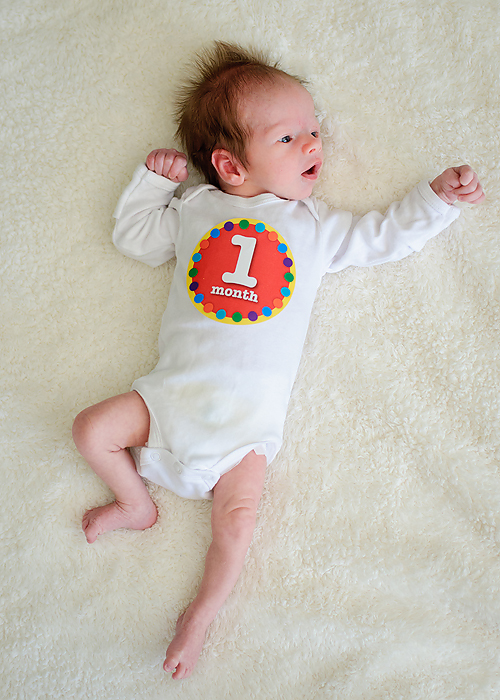 The forehead wrinkles.  Love them.  He looks like such a little old man! 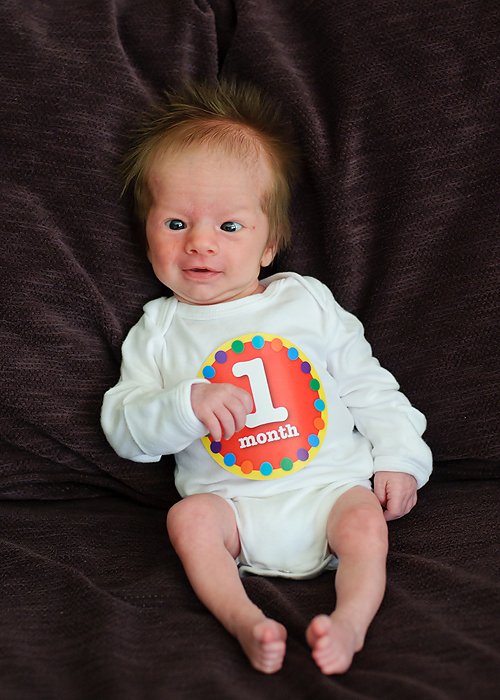 Are you laughing yet?  If not, get a load of this one! 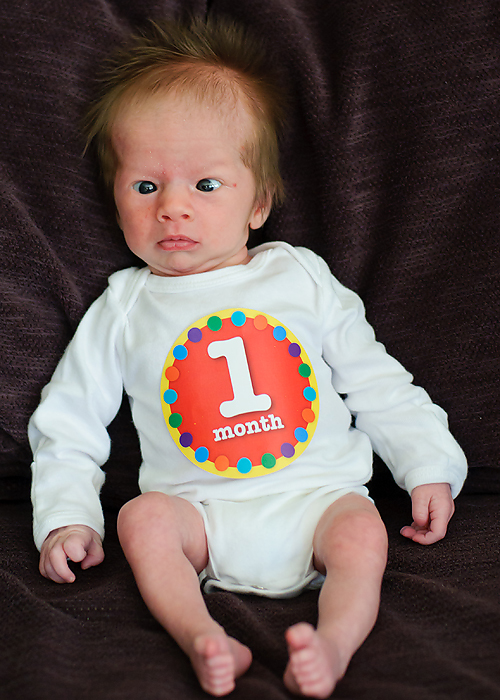 He makes this face all the time, especially right before he eats.

And a sweet little grin (fairly sure it was more about gas than me, but it’s still so cute!) 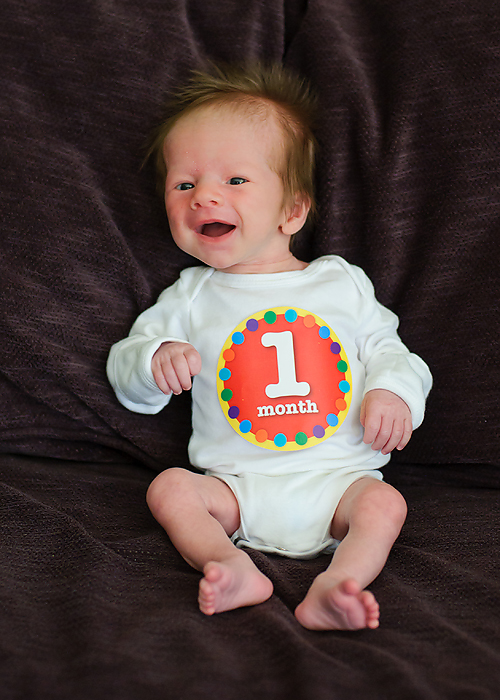 One Reply to “One Month”