He lives right here in Houston.

Connor has been bitten by the super hero bug. It started shortly after Halloween when I picked up a Spiderman costume for $10. Now, as you can see, he’s into Batman. But my favorite superhero’s are the ones he has come up with in his imagination, SuperStar, SuperLightening, and the newest addition SuperCloud. Here is a video of him explaining these three amazing heroes. Oops. Nevermind on the video. I recorded one, but our video camera is on the fritz, so it’s a no go. I had two favorite parts of the video: first, my dog puked in the middle of it, so that was a nice little interruption. And second, when asked about his favorite, he replied that he liked SuperCloud eighty eightian. That number, for those of you who might be unfamiliar with it is 80 with 80 zeros. He is one cool dude. 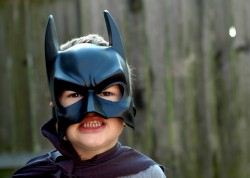 6 Replies to “He doesn’t live in Gotham City”