On Monday, the morning of her birthday party, I took Camryn to the ENT to have her ears looked at.  She’s had 7 ear infections since she was 3 months old, and enough is enough!  The doctor suggested getting tubes, which I was really thankful for.  I’m tired of the monthly doctor visits and antibiotics!  The only days available for the surgery were that Thursday (the day Derek and I would still be out of town with the boys) or August 20th.  I really did not want to wait another month to get it done, so I talked to the doctor and my mom and we decided that Mamaw could take her on Thursday morning to get it done.  I should probably start saving now for the therapy bill once she finds out that she, the poor third child, had surgery while her mom, dad, and brothers were on vacation.  Things like that never happen with a first child!

They had to be at the hospital bright and early on Thursday morning.  Camryn wasn’t allowed to eat or drink anything…look at her poor, pitiful little face!

She spent some time before the surgery reading books… 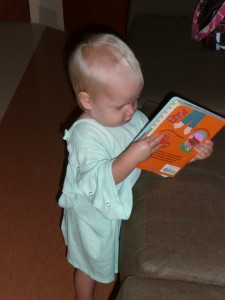 And even took a little nap!

My mom tells me that she screamed and screamed when any of the (female) nurses did anything, but she sat, happy as a clam, with the (male) anesthesiologist, and when he took her back for the surgery, she never even looked back.  That just tells you what a daddy’s girl she is.  She definitely prefers men over women.

The surgery took no time at all, and when the doctor found another horrible ear infection (where there had been no infection on Monday), I was definitely glad that we did the surgery asap instead of waiting until August.

Shortly after the surgery, she happily crawled around on the bed…

chowed down on cheerios… 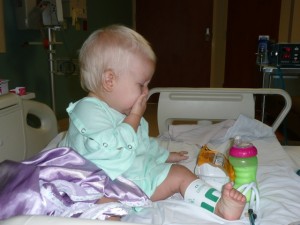 And practiced climbing in and out of the hospital closet. 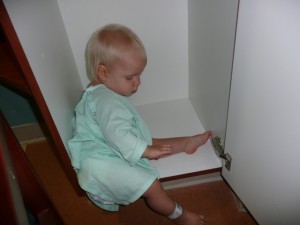 By the time Derek, the boys, and I got home on Thursday afternoon, you never would have guessed that anything out of the ordinary went on in her little world.  And when we flew to Dallas that night (and got delayed at the airport for several hours), she was just happy, happy, happy.  Hopefully, she won’t hold anything against me. 🙂

(And thanks again, mom, for taking care of her!  You really went above and beyond!)