Logan’s been going through a bit of an eating strike.  He snacks like a pro…it’s the actual meals where he has a hard time.  We have a family rule that everybody must eat one bite of everything on their plate before being excused.  Logan is famous for saying “I don’t like this!” having never tried it before.  Drives me crazy!

So last night was especially bad because I put…oh horror of horrors…squash and zucchini in our chicken spaghetti sauce.  Both boys were carrying on and moaning and groaning about it.  Connor is pretty good about trying things.  I don’t know if he would admit it, but I think he actually liked the zucchini.  But Logan is a different story.  He carried on and on, complaining an whining up a storm.  Derek, in what I think he thought was a moment of parenting genius, informed the boys that when he was a kid, if he didn’t like dinner, his mom would say that she was not a short order cook, and if they didn’t like what they were served, they were welcome to make themselves a peanut butter sandwich.

So what did Logan do?  He jumped at the opportunity and made himself a sandwich. 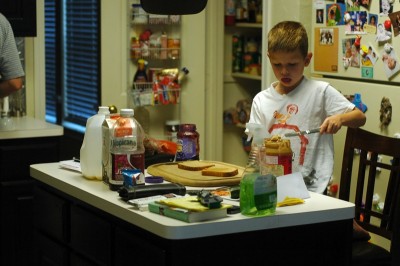 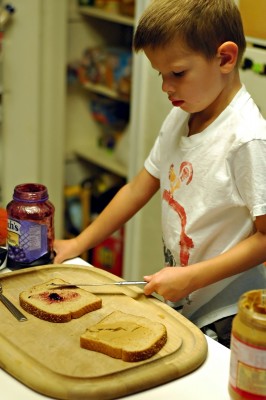 He was quite pleased with himself.  I’ll have you know that Mr. I’m Not Hungry ate every last bite of that sandwich. 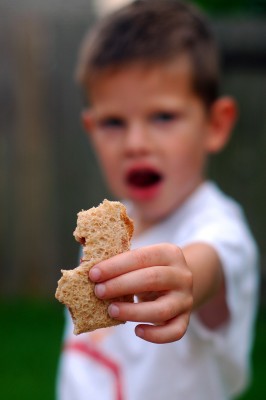 And he’ s so cute…little Mr. Independent…it was hard not to smile about the whole thing. 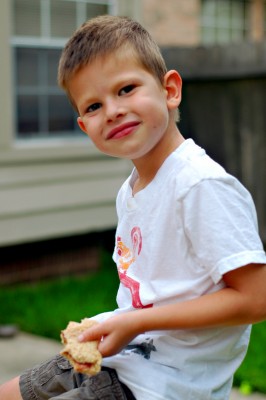 I’m quite certain that when Derek told the “when I was a kid” story, he didn’t actually think either of the kids would jump up and make themselves dinner.  That just goes to show that we’ve always got to be on our toes with this one!

(And, just for the record, I still made him eat a bite of zuchinni and bite of chicken.  Mean mama.)