Getting Connor an alarm clock changed our mornings around here.  Before he had an alarm clock, it was like waking a sleeping bear every.single.morning.  But now, he sets his alarm (for 6:30, which is actually a compromise.  He wants to wake up earlier so he can have more time to play, and I want him to get as much beauty rest as possible.  So 6:30 is our compromise.)  By 6:35, he’s out of bed and in my room, waking me up.  I love that I count on my 7 year old to get me out of bed in the mornings!  He gets himself dressed while I pry my eyes open and stumble out of bed.  We meet in the kitchen by 6:45 so I can make him breakfast which usually consists of getting a granola bar out of the pantry, but every once in awhile he wants oatmeal or eggs so he can “run faster in p.e.”  After breakfast, he finishes up his morning routine, and I make his lunch if it’s a sack lunch kind of day.  He only likes to buy when they are having chicken nuggets or popcorn chicken (Tuesday), cheeseburgers (Thursday), or corn dogs (every other Wednesday).  He has this personal goal of being ready by 7:00 every morning, and he’s usually pretty close.  Once he’s ready, he gets to play.  He almost always goes back to his room and works on whatever project he’s got going on…coloring, drawing, practicing his cursive, writing a story, or building legos.  He loves to work at his desk!  At precisely 7:28–everything about Connor is precise–we start heading to the bus stop.  He still gives me hugs and kisses every morning before he boards the bus, and waves at me from his window until I am out of sight.  I love it.

Most morning, when I get back to the house, Logan and Camryn are still sleeping, and Derek is just leaving for work.  I enjoy a few minutes of complete peace and quiet with  my cup of coffee.  And when I say a few minutes, I mean a few.  Camryn is usually squawking within 5 or 10 minutes.  When I go into her room, she grins at me real big, but then says “dada?  dada?  dada?” over and over and over again.  I get the feeling that she’s always a little bummed out that she just gets mama and dada is already gone to work.  She gets over it eventually and starts handing me the things from her crib one by one: a baby, another baby, a third baby, her blanket, her bear, her glow worm, and finally, she reaches her arms to me and I scoop her up.  Some mornings, she just wants to be held for a few minutes.  Sometimes she goes right into her chair for breakfast.  If Logan wakes up before her (which is rare), she wants to be with him.

And finally, Logan wakes up, usually sometime between 8:00 and 8:15.  This is one of my favorite moments of my entire day.  He sneaks out of his room, tiptoes to find me, and peeks at me from around a corner.  Once he catches my eye, his face breaks into the huge Logan grin that I love so much and he runs into my arms for a morning hug and cuddle.  It’s short lived, I’m sure less than a minute, but I love it so much.  He’s my morning tv watcher and after our bear hug, he spends the next 30 minutes or so vegged out on the couch.  It’s the stillest part of his day because once he gets going, he does not stop!

I really love our morning routine.  I’m sure it will change once the summer comes, and then it won’t ever be just like it is right now.  I treasure the simplicity of them and the fact that, for the most part, they are not a frantic part of our day.  Now dinnertime and bedtime?  That’s a whole different ballgame.  But our mornings are a peaceful and slow.  I love them.

I’ve been writing this post in my head for awhile and kept meaning to take pictures of our mornings, but I give up on that idea.  But this is the grin I get from Logan every morning when he sees me.  Love it! 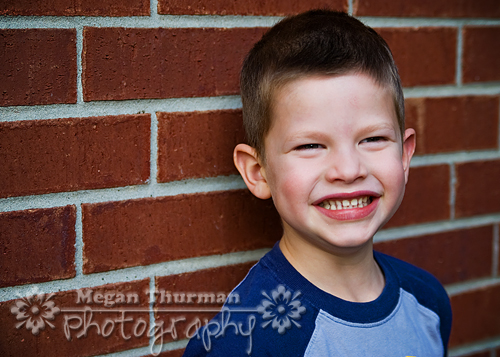