Last year, we joined in with a group of our friends and signed our kids up for the Houston Kids Triathlon.  We really had no idea what to expect, but it seemed like a fun idea.  The kids really liked it, so I decided to go ahead and sign them up again this year.  I ended up not getting to see them race last year because of a girls trip that had been planned forever, so nothing was going to stop me from being a crazy proud mom out there with my camera all during the race this year. We had the added bonus of Derek’s parents coming into town for the weekend, which was especially great not just because they could see them compete, but also because that’s 4 extra hands!  And Nonny Hands really should count for more.  She took care of Camryn and Sullivan pretty much the entire race.

Sunday started bright and early.  We were all loaded and out the door by 6:15, with only one quick turn around needed to grab the forgotten baby stroller.  There were over 1500 kids racing, so as you can imagine, it took awhile to get everything started.  The kids race in waves based on age, and it’s a stagger start pool swim.  Logan was up first.  His race was a 100 yard swim, a 3 mile bike ride, and a .5 mile run.  As his age group marched past us, he acted all like he couldn’t hear us cheering and hollering for him.  He gets so embarrassed about that kind of attention, but I just can’t help myself. 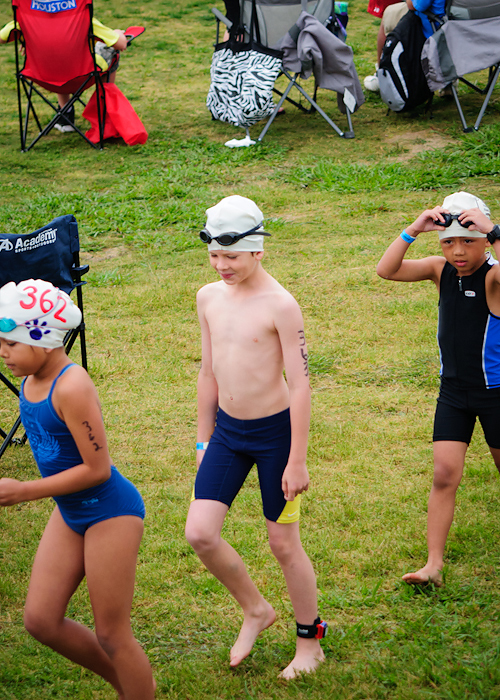 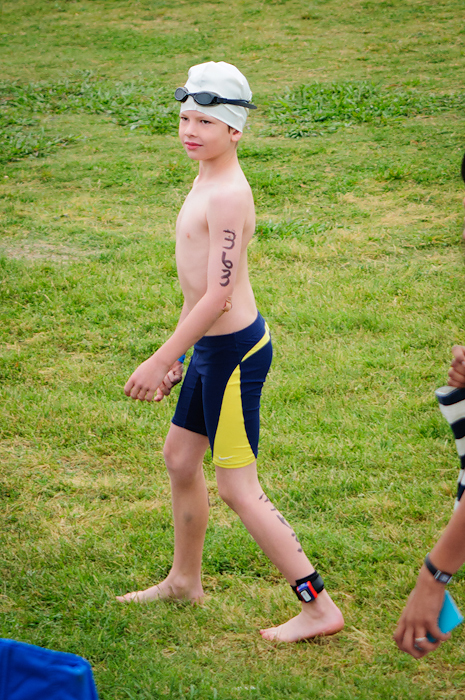 He came out of the pool looking strong! 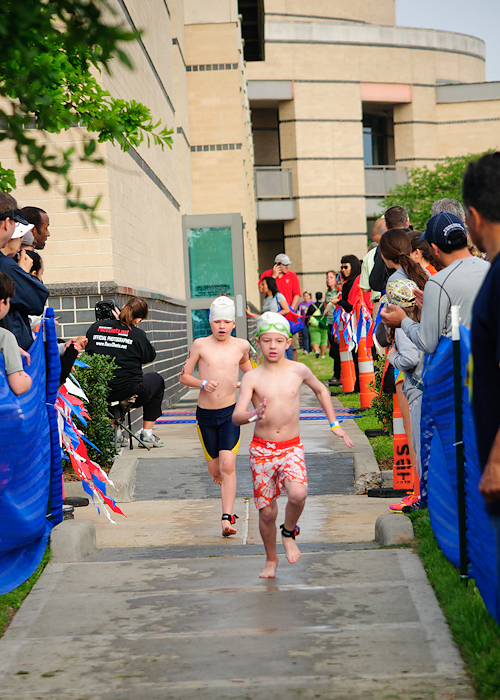 love the tongue sticking out. 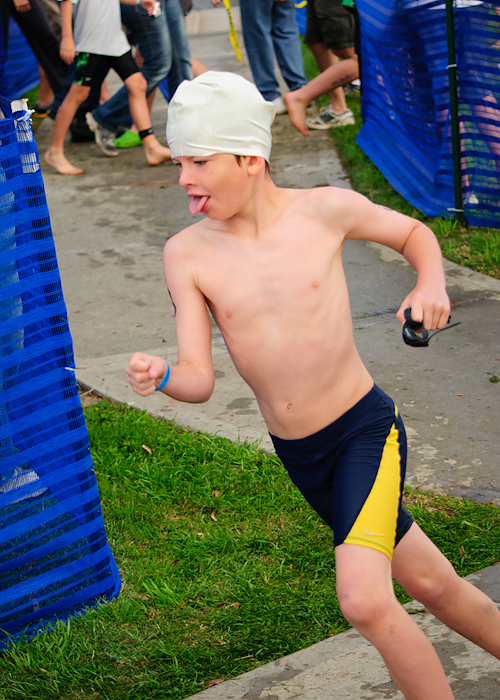 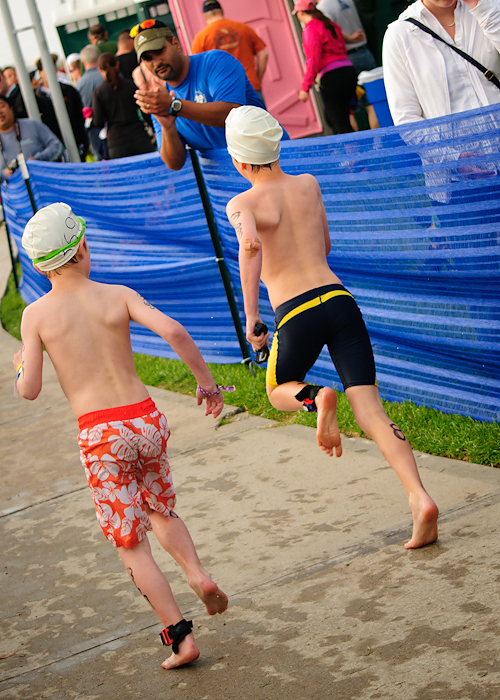 Up next: transition.  I probably shouldn’t admit that I still tie his shoes for him most mornings.  I’m glad to see that he can do it by himself, even if it does take complete concentration. 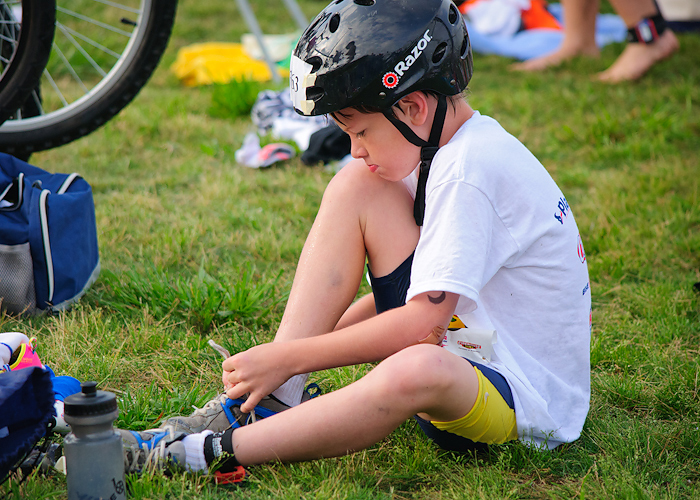 He had to get his bike up this big hill.  His bike is heavy!  He slipped on the wet grass, but kept on trucking.  I was so proud.

And finally, the rubber meets the road.

His biking portion took a little longer than I expected, and it turns out it was for a good reason.  His chain fell off in the middle of the race, but luckily they have volunteers out on the course and someone fixed him up right away. 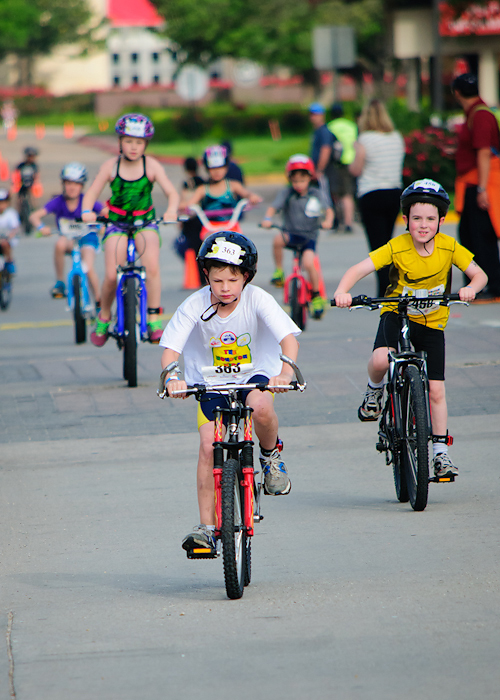 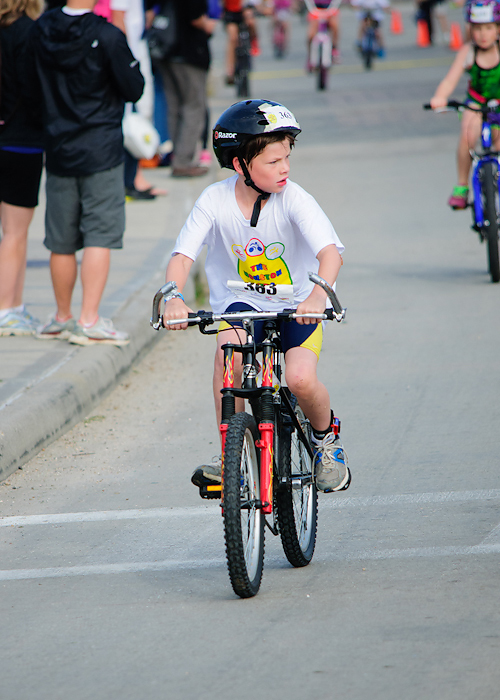 And here he is going strong to hold his spot.  Love the intensity! 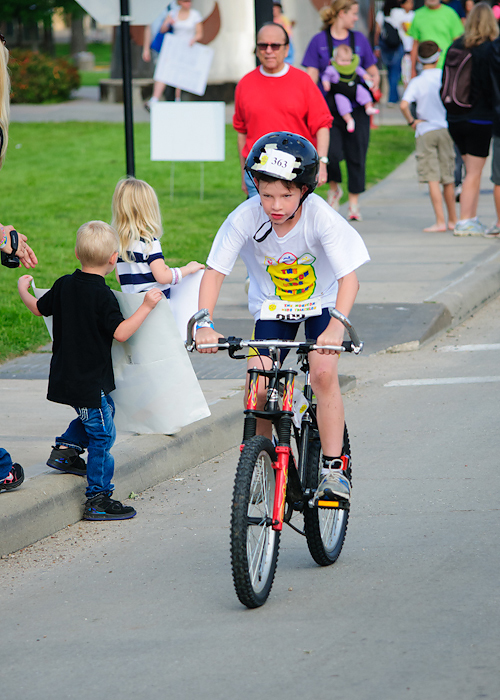 In an extremely unfortunate turn of events, I did not make it to the finish line in time to see him finish.  Like I mentioned there were 1500 kids participating, and 950 of those were in the junior division (which is kids 10 and under).  That equals tons and tons of parents, all running around like crazy.  There was a huge crowd to get through, and Logan’s half mile run only took him 4.5 minutes.  I waited and waited at the finish line and eventually sent Derek over to the corral where they keep the kids to see if he was there.  Sure enough, he had already finished.  The photographer in me was totally bummed to miss the photo op!  But the mama in me was just proud to see his smiling face.  He loved it.  And he did great!  He ended up finishing 19th out of 110 in the 8 year old boy division.

After a bunch more sitting around, it was finally time for Connor’s division.  Connor raced in the senior division which was a 200 yard swim, 6 mile bike ride, and 1 mile run. 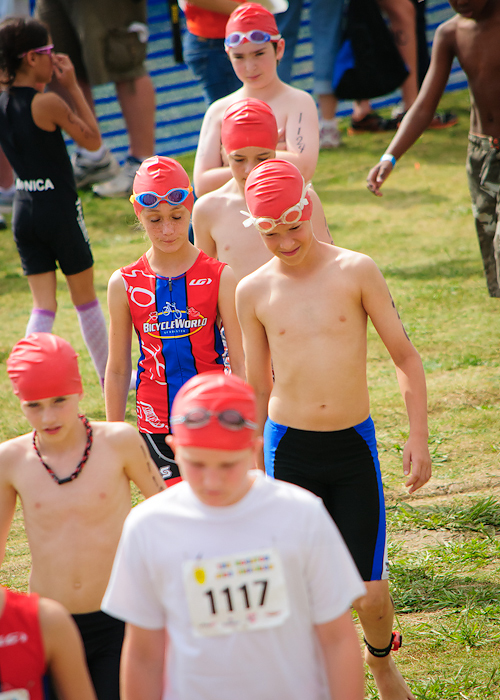 If you know Connor, you know he is intense in everything he does.  This triathlon was no exception.  He was in the zone coming out of the swim! 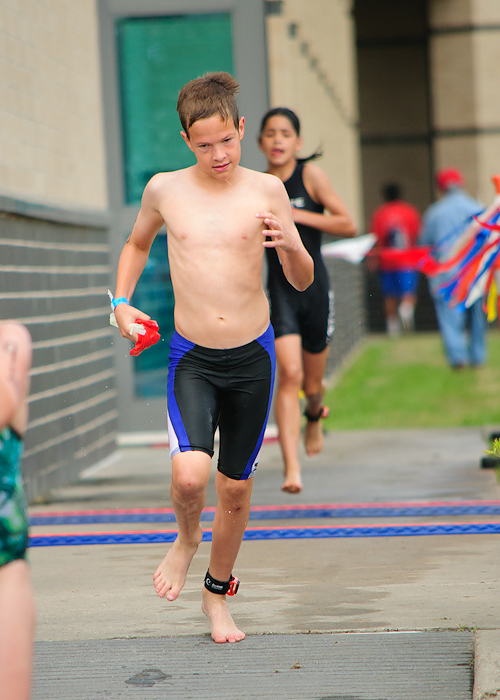 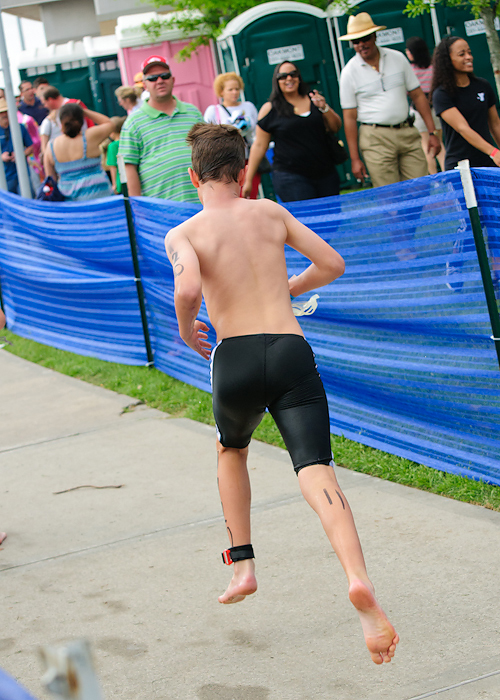 Ready for the bike race.  We actually rented him a road bike for the day.  His bike is broken, and plus he had two soccer games to play later that afternoon so we thought it would be worth it to get him on a nice bike and save his legs.  I definitely think it was worth it!  And he did, too.  Of course, now he thinks he needs to always ride a $3000 bike.  Dream on, kiddo. 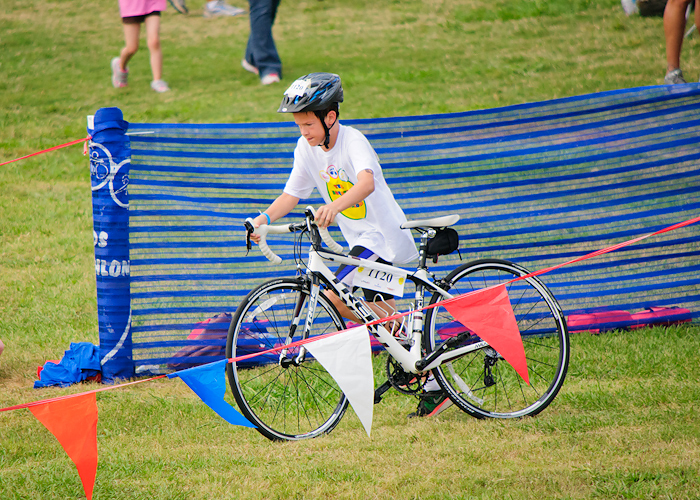 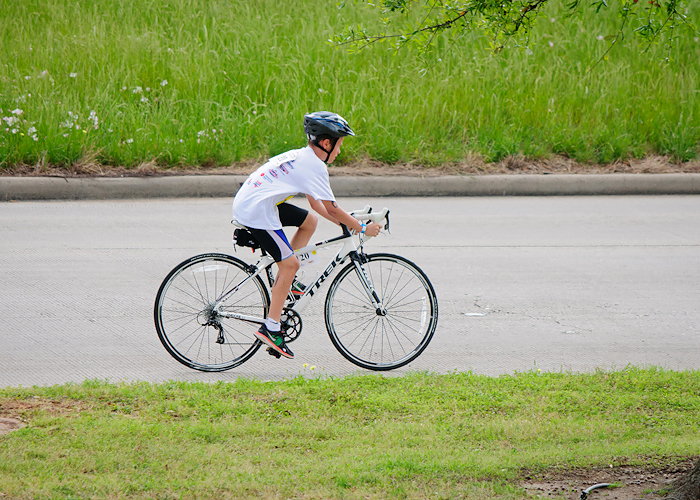 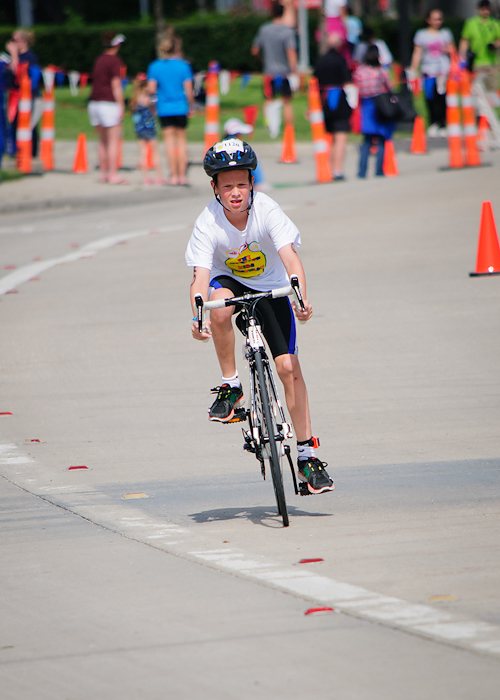 The senior race wasn’t quite as huge (only 575 racers),  plus he was at the very beginning of the heats, plus tons of the crowd had already cleared out, plus his running portion was a mile long which we figured gave us 8 minutes or so.  We made it to the finish line with plenty of time spare.

We were cheering him on so hard!  Finish strong!  Push it!  Give it all you got!

And so he did, passing up these guys in the home stretch. 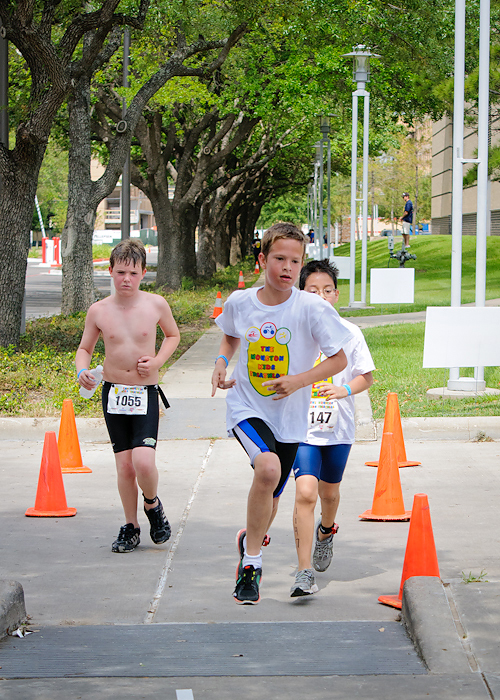 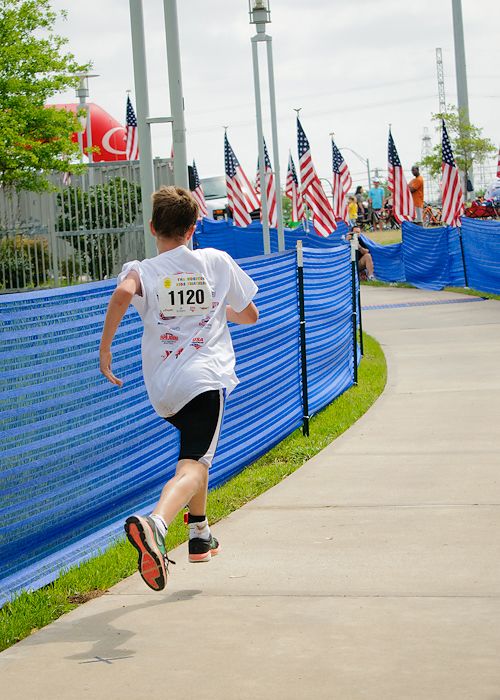 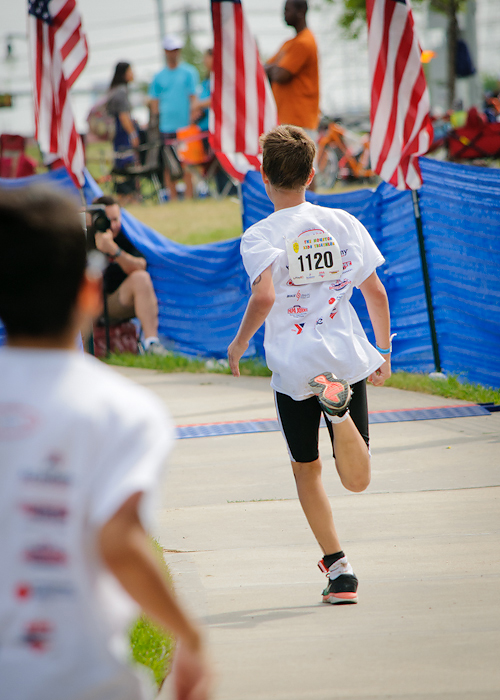 I love when we glanced back to make sure he had really passed them by. 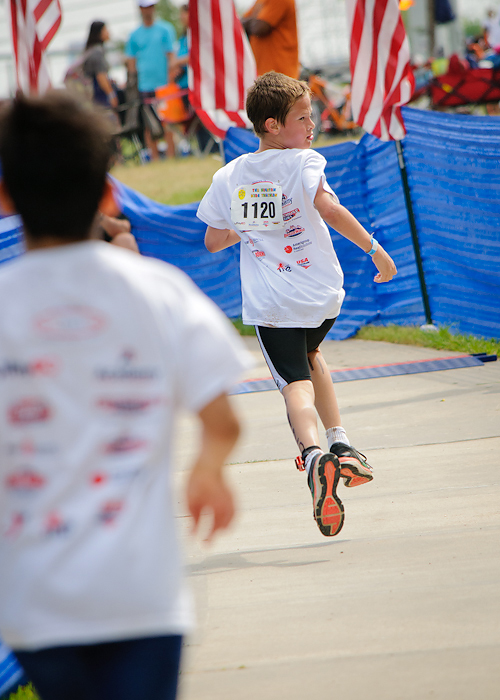 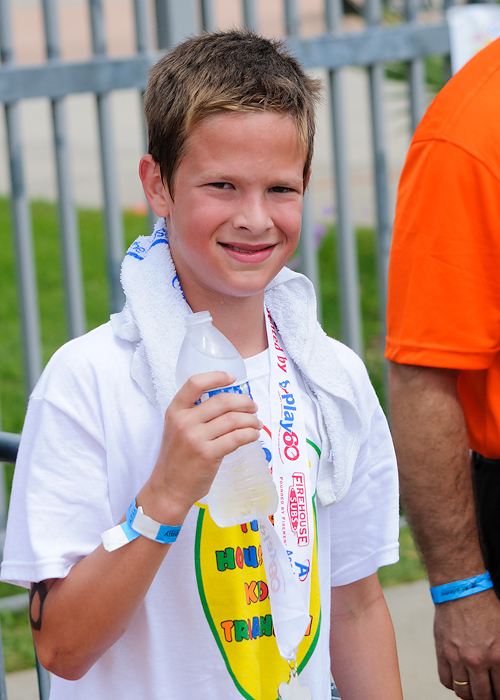 Connor was fast.  Like we wondered if maybe he would place in the top three fast.  We debated staying around for the awards, but in the end, as soon as we could get in the transition area to get bikes, we headed home. Nonny and Pops were ready to get on the road, plus Connor had his soccer games to get ready for.

Well, as it turns out, we probably should have stayed.  He won second place in his age group out of 124 kids!  He was only 5 seconds away from getting first place.  When we saw the splits, we noticed his transition times were really slow.  Most of the top finishers transition in 1.5-2 minutes.  His took over 3.5 minutes.  We asked him about it, and it turns out that he forgot where his bike was parked in the transition area and didn’t realize it until he had put on another kid’s shirt.  Only Connor!  We had a good laugh about it.  He also forgot to take his helmet off after the bike and had to turn around to put it back.  Looks like we’ll need to work on transitions a bit if he does another race (which he is already asking about, of course.)

Even more amazing than the 2nd place finish is the fact that he cranked out a 6:18 mile.  That was actually the 8th fastest mile time out of all 545 senior competitors–which is kids up 15 years old!  That kid is a runner.

All in all, it was a great event.  I’m so proud of both my boys!  I can’t wait until next year.