On July 12, 2008 at about 4:30 p.m., I was standing in the Wii game aisle of Wal-Mart and I wet my pants my water broke.  When it happened, I thought it was my water….but then I remembered the whole wetting my pants issue when I was pregnant with Logan and I wondered if that was happening again.  But, as it turns out, it was definitely my water that time.  About 8 hours later (which was way longer than I thought it would be!), Camryn Jane made her way into this world.

I ended up going to Wal-Mart this afternoon, and I couldn’t help but go down that aisle again and think about this day a year ago.  And, since I’m a big dork, I pulled out my cell phone and took a picture of her. 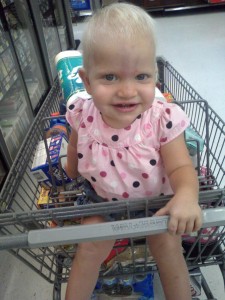 I can’t believe that my baby girl will be 1 in just a few hours.  I’m feeling so nostalgic about the whole thing.  I think I’ve gotten more nostalgic over the years…I guess I just realize more and more how fast it all goes by! 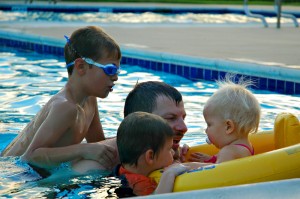 On June 21, Derek boarded a plane to Germany.  He worked for a week, I joined him for a week, and he then traveled on to China.  Today, after 3 weeks away, he is home!  We couldn’t be more thrilled to have him back with us.  I loved watching the boys run into his arms, and Miss Camryn simply wanted to be held.  She rested contentedly in his arms for the first 20 minutes he was home (and you guys know how busy one year olds are!)

We survived without him…had some really good days,and some really bad days.  But I can say, without any reservation, we are all better off when he is home with us.  He’s my better half and the best dad our kids could possibly ask for.  I mean, seriously…he just traveled for 21 hours to get home, his body has no clue what day or time it is (China is 13 hours ahead), and within 1 hour of being home, he was off to the pool with the boys (and the baby girl and I soon followed.)

He is seriously the greatest! 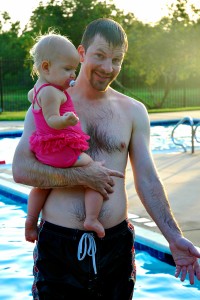 When my bff since the 5th grade, RyAnn, decided to follow me home from Arlington, I was more than thrilled.  I just knew we were going to have a blast, letting the boys (and girl) run wild and slumber partying it up.  I also knew that we were going to have to maximize our time because it was a short visit.  We arrived at my house at 4:30 on Tuesday afternoon, and she had to go home on Thursday morning.  We went to my favorite kid friendly restaurant on Tuesday night.  We had a great time and a very peaceful dinner while the kids played in the sandbox.  On Wednesday, we were up and at ’em bright and early.  Our first stop was Space Center.  Connor, and Logan had a great time like always.  Brock had a pretty good time, but poor Braxton…he’s not quite the fan of of NASA.  He was a real tropper, though.  (Oh, and Camryn was with us and she was awesome.  She sat so nicely in her stroller and then took a pretty good nap.  It’s harder and harder for her to sleep when we are out and about, so I was thrilled with her NASA nap.)  After a quick stop at the drive thru for lunch, we headed back to my house for a bit of much needed quiet time.  Ry and I needed the quiet time as much as the kids!

By 4 p.m., we were ready for our next adventure: the beach.  That’s the part where I think we were maybe a bit crazy.  Have you ever taken a 6 year old, two 4 year olds, a 2 year old, and an (almost) 1 year old to the beach?  Overall it was a huge success, and the kids had the best time.  Even Camryn warmed up to the beach this time!  The last time we went, she cried and hated nearly every second of it. This time, she was happy, happy, happy until the last 30 minutes.  Ry will probably want me to tell you that I got just about as cranky as Cami at the end.  I wasn’t feeling very well, and holding a screaming, sand covered 1 year old is just not very fun.  We made it back to my house a little after 8:00, de-sandified the kids and ourselves, fed them a quick dinner, and tucked them in.  Because of the insane day, they all crashed.  That’s when we decided to order ourselves a pizza for dinner, and we proceeded to eat the entire thing, just the two of us.  I usually order a large for my whole family and usually have a piece or two leftover!  We both felt like huge pigs, but we figured we deserved it after all the activities of the day.

I took tons of pictures at the beach and I could not narrow down which ones to post.

Camryn started out her beach time in the pack and play.  It worked out great…she could get acclimated to the wind and the sand before being plunged into the sand. 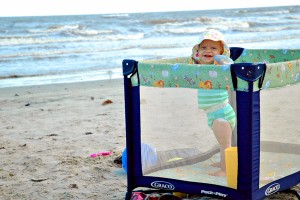 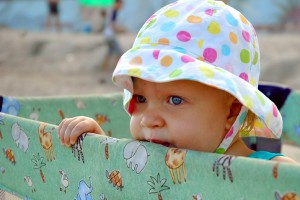 I tried to get pictures of all the kids, but Brock and Logan were so busy playing that this was the best I could do. 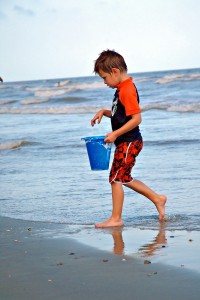 Connor was a bit more cooperative, but the cutest was definitely of Braxton! 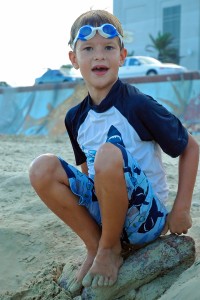 After awhile, the Princess warmed up to the feel of the sand.  I was so happy to see her enjoying the beach! 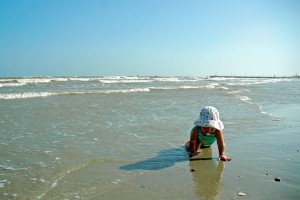 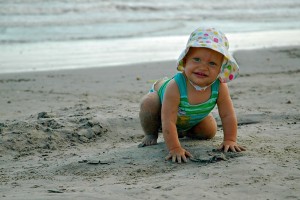 The big boys definitely take the cake for getting the dirtiest!  There was some hard core sand playing going on. 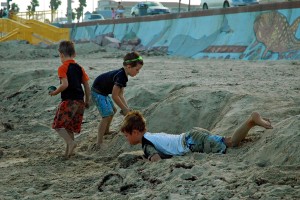 Ry and I each took pics with our kiddos. 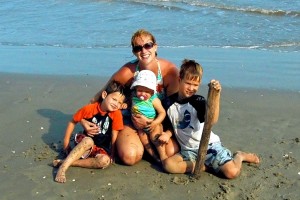 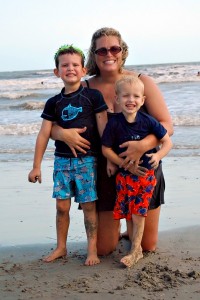 And finally, the kids got hungry.  I love this picture.  The seagulls are crazy! 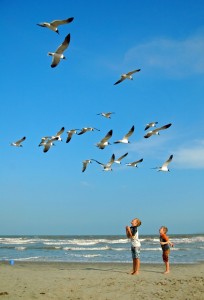 It really was a great couple of days, and we couldn’t have asked for our kids to behave any better.  They all had a blast, and I’m sure that Ry and I will both recover…although it might take awhile. 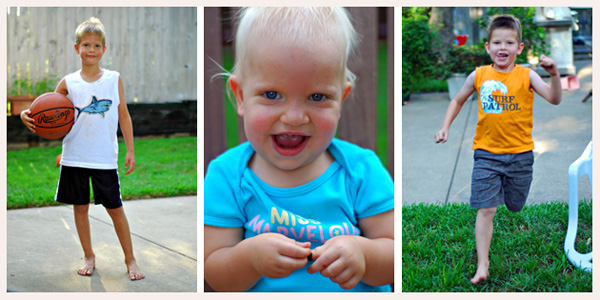 They grew while I was away.  I warned them not too, but despite my pleading, they all looked a little older, a little wiser, and a little hairier.  Well, Camryn looked hairier.  Her hair is starting to grow in, and I am pleased to see that her mullet is really beginning to take shape.

I can’t even tell you how fun it was to see them after being away.  I was literally giddy with excitement when I was getting off the plane.  They were so sweet, hugging me, giving kisses, and each talking a mile a minute to get me up to date with everything.  They had tons to say because they do not like to talk on the phone.  Logan wouldn’t talk to me at all while I was gone, except once when my mom put the phone to his ear and I heard a little grunt.  Connor was slightly better, answering a few yes or no questions before saying “mom, I just want to be done talking.”  Camryn just tries to eat the phone, like all good 11 month olds.  So we had lots of catching up to do.

I was just thinking that it’s funny that I haven’t blogged at all since I was in Europe.  What kind of blog freak blogs more on vacation than while at home?  Well, that’s easy.  The kind of blog freak who spends 8 hours total on a first class train with free internet and not a single reason to get up unless it’s to go to the bathroom.  Lord knows I don’t have that kind of time once I’m back on mom duty!  Not that I’m complaining, but seriously….that train ride was really one of the best parts of our vacation!  Derek and I both agreed on that.  It was relaxing, cool, and we just got to hang out…chat a bit…retreat to our own things a bit…really perfect for us.

Of course, the Eiffel Tower is cool, too.  And so is the Louvre.  Okay, maybe I’m just saying that line about the Louvre because it’s what I’m supposed to say.  Confession time.  The Louvre bored me to tears.  It was cool for the first little bit…thinking about these 500 year old sculptures and marveling at the details and what not, seeing the Mona Lisa and a few other famous works of art, etc. But I could have been done there after 30 minutes.  My husband, on the other hand, really appreciates art and history and all those refined sorts of things.  I appreciate things like giant ferris wheels near the museum.  He appreicates the actual museum.  It’s a wonder we’ve made this marriage work. 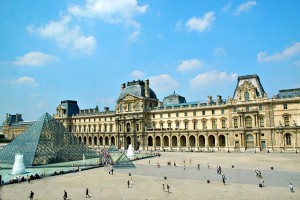 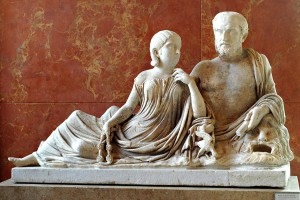 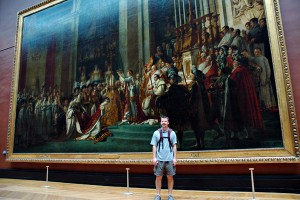 I started this blog 24 hours ago, and I better just hit publish before it ends up in the draft folder forever, along with 18 other blog posts.  I would have had more time for blogging over the past few days if I hadn’t been busy perfecting my Wii bowling skills, so much so that I now have a signature bowling style and a sore arm.  And I was busy at Hawaiian Falls with the boys all day today.  I am hard core about water parks, and even though this is a small one geared to kids, I totally had as much fun as they did.  I love waterparks.  And ferris wheels. But not museums so much.

Derek and I are on the train on our way back to Germany.  Tomorrow, bright and early, I head back home (well, home-ish.  We’re going to stay a few more days at my parents’ house.)  It’s been a fun, hot, sweaty, cultural, relaxing (but tiring) experience.  There are many stories to tell, many pictures to share, and many lessons learned.  But for now, because my computer battery is on it’s tail end, I share with you a pictoral journey I’ve entitled When Self Portraits Go Wrong.

D and I are big fans of the self portrait, as you will see in blog posts coming up.  But these, my friends, these are really something else.  It’s all because of the flash.  We went to the Eiffel Tower last night, after dark, hence the use of the flash.  These are the only photos I took in all of Europe where I used the flash.  You’ll see why in a moment.

This was the first one, which in retrospect really wasn’t too bad.  I really should have stopped while I was ahead.  Little did I know what the future would hold. 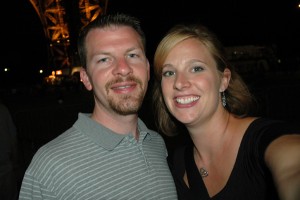 Derek’s eyes started to get droopy… 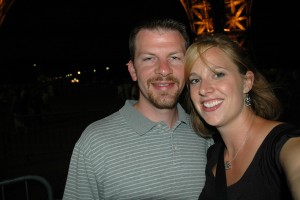 And soon, it rubbed off on me.  This has got to be, hands down, one of the worst pictures ever taken of the two of us. (One might ask why I would put something like this on my blog…) 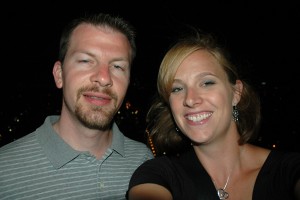 I managed to open my eyes back up, but Derek was still lost in Droopy Land.

And then this one, which literally makes me laugh out loud.  He thought maybe it would be a good idea to close his eyes in preparation.  Clearly, that plan backfired.  Big time. 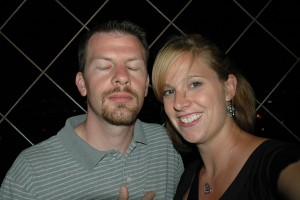 And finally, Derek looking pretty good, and Meg…oh Meg…the cheeser is out in full glory. 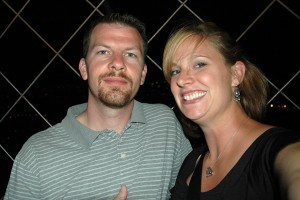 Lest you think that all our self portraits are so unfortunate, here is one of my favorites of the entire trip.  Ah, Paris….we’ll always have Paris. 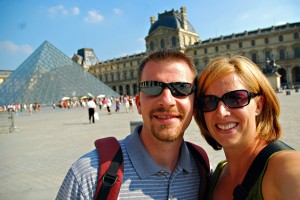 More to come, including stories from the subway, burning my hair, removing toilet paper from a toilet, cultural differences, observations in people watching, and a rundown of all the fun things we did (mostly for my own benefit.  Mommy brain is still in full effect, even on vacation.)