There has been a lot of button-pushing going on in the Thurman fam lately.  I would rate both Connor and Logan at the professional level in regards to their abilities to push each others’ buttons.

The first time I ever used the phrase, a very indignant Connor said “but mom!  we don’t even have buttons!”  Totally cracked me up.  After an explanation, both boys have really latched onto the phrase, and it’s said pretty much on a daily basis by one boy or the other.

Yesterday, Logan was going for an all-time record for the number of Connor’s buttons pushed in one day.  I could see Connor getting more and more frustrated with Logan’s antics.  Finally, Connor just couldn’t handle it any more.

Oh, I tried so hard not to laugh.  I really did.  I love that kid, and I love that finally, at almost 7, he has learned (for the most part) to use his words and not his hands.  I quickly decided that Connor could use some alone time so that’s exactly what we did.

And, it confirmed yet again that the boys totally need their own space.  I can’t wait to get this room redo underway!  I ordered Logan’s  bedding for his new room, and I’ve narrowed Connor’s down to 2 choices.  Logan’s favorite color is orange, and if you know me or have been reading my blog long at all, you probably know that I am not afraid of color on the walls.  So when Logan informed me he wanted to paint his room orange, it didn’t phase me at all.  This is the bedding we’ve picked out to work with the orange walls he wants:

It’s got a bit of a safari theme, but the bedding itself isn’t overly theme-ish.  The sheets have animals on them, but he’ll love that.

Connor wants to go with camo in his room.  It’s been a bit of a challenge finding queen sized camouflage bedding that I like, but I’ve narrowed it down to these two choices: 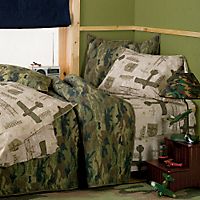 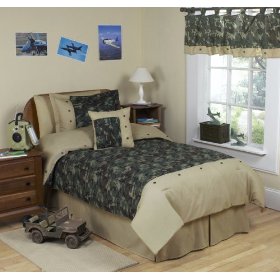 I’m really leaning towards choice 1, but it’s a bit more expensive…I think he would love those airplane sheets and the fact that the comforter all camo unlike the first one.  We’ll see.   Besides picking bedding and paint, I’ve got to get a new toy/book shelf, and a smaller desk (to replace the kitchen table that’s in there right now.  Yes, we moved our old table into Connor and Logan’s room.)  I’m going to be scouring Craig’s List or heading to Ikea if I get impatient.  And, of course, Derek and I have to pick out our new bed.  I love house makeovers!  So much fun.

And finally, just to show that the boys aren’t always pushing each others’ buttons…or turning knobs or pulling levers (although it feels like it’s constant lately…), I found this on my Flip video camera this morning.  It made me smile.